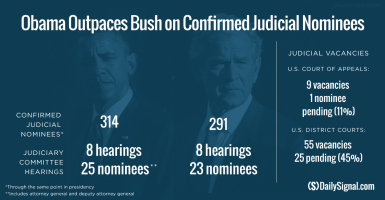 Republican Sen. Chuck Grassley of Iowa is pushing back on Democratic charges that the GOP-led Senate has dropped the ball on judicial confirmations under President Barack Obama.

Grassley took to the Senate floor Monday after his colleagues confirmed the 314th judicial nominee since the president took office, noting that by this time in 2007, under former President George W. Bush, only 291 nominees had received Senate approval—23 fewer than the number confirmed under Obama.

But Democrats have chastised Republicans for moving only a sliver of nominations through the Senate this year, deeming the slowed confirmation rate the basis of a “vacancy crisis” panning out in federal courtrooms.

Grassley argued that his colleagues would have confirmed a greater number of nominees this year had the Democrats not “rammed through” 11 judges last December during their final days of congressional control.

Under the Senate’s “regular order” rules, he explained, consideration of those nominees should have been delayed until the following month after the new GOP-led Congress began its term.

Even so, Grassley continued, the current Senate Judiciary Committee is working at nearly the same pace it was during the seventh year of Bush’s presidency when Democrats led Congress.

While Grassley maintains that his party has effectively advanced nominees, Democrats have underscored the slew of empty seats still waiting to be filled.

Last month, the liberal judicial advocacy group Alliance for Justice released a report finding that since congressional control shifted to Republicans in January, the number of judicial vacancies increased from 43 to 67.

Further, the report noted the majority of the 38 judicial vacancies that do not yet have nominees to fill the openings fall in states with at least one Republican senator.

Sen. Patrick Leahy, D-Vt., condemned his GOP counterparts last month for the delays, arguing they have “virtually shut down the judicial confirmation process.”

“Rather than solving problems, the current Republican leadership has instead prioritized divisive issues that play only to their political base,” Leahy said in a statement.

But Grassley called the vacancy crisis “manufactured,” noting that 2015 has so far marked the fifth lowest vacancy rate in the past 25 years.

“The Senate is finally back to work after years of stagnation under Democratic leadership,” Grassley said. “Rather than complaining about a problem that does not exist, we should focus on solving issues facing hard-working Americans.”