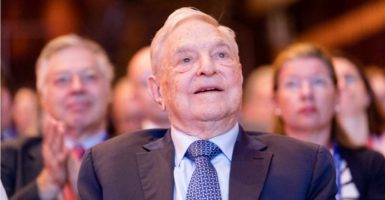 Six Republican senators sent a letter to Secretary of State Rex Tillerson requesting that he investigate the relationship between USAID and George Soros', pictured above, foundations. (Photo: Thierry Monasse/Polaris/Newscom)

Judicial Watch filed a lawsuit against the Department of State and the U.S. Agency for International Development for records on funding awarded to George Soros’ Open Society Foundation-Albania, the conservative nonprofit watchdog announced Wednesday.

The suit was filed May 26 after both government agencies failed to respond to Judicial Watch’s Freedom of Information Act requests.

The requests sought records related to contracts, grants, and any other funding that the State Department and USAID awarded to the Foundation Open Society-Albania. The requests also sought communications between the agencies and the foundation.

“This is our second FOIA lawsuit to uncover the truth about the scandal of Obama administration’s siphoning tax dollars to the Soros operations in Europe,” Judicial Watch President Tom Fitton said in a statement. “We hope and expect the Trump administration to finally let the sunlight in on this growing controversy.”

Six Republican senators sent a letter to Secretary of State Rex Tillerson requesting that he investigate the relationship between USAID and the Soros foundations. The senators claim that the federal funds the Open Society Foundations has received have allowed the group to advocate progressive agendas in Macedonia and Albania.

Judicial Watch also filed a FOIA request with USAID and the State Department for records on funding and political activities of the Foundation Open Society-Macedonia.

The Open Society Foundations established dozens of left-wing organizations used to overthrow the Macedonian government, according to Judicial Watch.

The work the Albania foundation supports has helped the Albanian people by strengthening education, health care, community activism, and journalism in the country, often in partnership with the European Union and the governments of the United States and Albania.

Judicial Watch’s Jill Farrell said her organization “stands by the accuracy of its press release.”