Should a Judicial Candidate Be Able to Request Campaign Contributions? 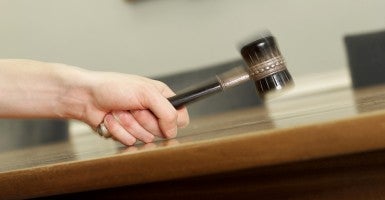 On Tuesday, Jan. 20, the U.S. Supreme Court will hear oral arguments in its first campaign finance case since it threw out the aggregate limit on campaign contributions to federal candidates last year in McCutcheon v. Federal Election Commission.

But this latest case involves the rules pertaining to state elections in Florida, not federal elections, and a ban on contribution solicitations imposed by the state bar association on candidates for judicial office.

The state of Florida, as do 30 of the 39 states that elect their judges, prohibits any candidate for judicial office from personally soliciting campaign funds or “solicit[ing] attorneys for publicly stated support.” Judicial candidates can conduct their races only through a campaign committee, which is authorized to solicit funds and seek public support, including endorsements from lawyers.

The Florida Bar claims that this rule is necessary to ensure the impartiality of judges and to prevent the actuality and appearance of corrupt influence on their decisions.   It argues the ban removes any quid pro quo link between a campaign contributor and the judicial candidate. The Florida Bar says that the rule is sufficiently narrowly drawn to meet the requirements of the First Amendment since the U.S. Supreme Court “has consistently recognized that states have a compelling interest in maintaining public confidence in the integrity of the judiciary.”

Nothing prevents the judicial candidate from being “told who donated to her campaign (and how much they gave) and who did not” or sending thank-you notes to the donors.

However, Lanell Williams-Yulee argues that the Florida ban on personal solicitation is a content-based regulation that “prohibits speech at the core of the First Amendment – the speech of candidates for elective office.” She points out that Florida is being selective in its supposed concern over corruption: The state has the same interest in preventing quid pro quo corruption “with respect to other elected officials but limits its ban on solicitations of financial support to judicial candidates.”

Most importantly, according to Williams-Yulee, nothing prevents the judicial candidate from being “told who donated to her campaign (and how much they gave) and who did not” or sending thank-you notes to the donors. The judicial candidate can even serve as the treasurer of her campaign. Therefore, the prohibition can’t be “justified as necessary to prevent bias when the candidate is free to learn who donates and to acknowledge contributors’ assistance to her campaign.”

The First Amendment issues raised in this case are going to be discussed at an event at The Heritage Foundation on Jan.20 starting at 12:30 p.m., immediately following the oral argument at the Supreme Court. Speaking on the panel will be James Bopp, general counsel of the James Madison Center for Free Speech, who filed an amicus brief in the case on behalf of a number of lawyers who have run for judicial office. Bopp is a well-known Supreme Court litigator on campaign finance issues. Another panel member will be Robert Corn-Revere, a First Amendment and communications law expert and partner at Davis Wright Tremaine, who filed an amicus brief with the Supreme Court on behalf of the American Civil Liberties Union. Finally, the panel will be joined by former Indiana Supreme Court Justice Randall Shepard, who also was the head of the National Conference of Chief Justices in 2006.

The public is invited to attend the Heritage event, and anyone who can’t attend in person will be able to watch it live as it is streamed over the heritage.org website.