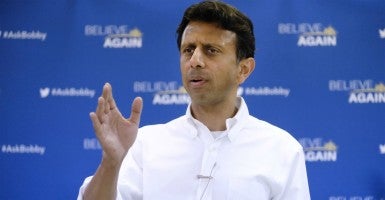 Planned Parenthood is suing Louisiana Gov. Bobby Jindal over his decision to terminate its Medicaid contract with the state after the release of controversial videos. (Jerry Mennenga/ZUMA Press/Newscom)

Planned Parenthood announced it will sue Louisiana Gov. Bobby Jindal for terminating its Medicaid contract with the state.

“Planned Parenthood is flailing,” said Mike Reed, Jindal’s communications director, in a statement to The Daily Signal. “This lawsuit is without merit and the state will aggressively defend our right to cancel the contract.”

The lawsuit is the latest in a series of efforts Planned Parenthood has made to exonerate itself following allegations that it is engaged in the sale of fetal body parts.

Elizabeth Slattery, a legal fellow at The Heritage Foundation, said that “even though the Obama administration is attempting to pressure states not to cut Planned Parenthood’s Medicaid funding, states are within their rights to do so if Planned Parenthood has violated the law.”

“In light of videos released by the Center for Medical Progress, there are serious questions about whether Planned Parenthood has violated a number of federal laws,” said Slattery.

“This is the same Planned Parenthood affiliate that was forced to pay the state of Texas $1.4 million in a settlement for allegations of Medicaid fraud,” she added.

Reed said Jindal has the right to terminate the state’s contract with Planned Parenthood.

According to the Washington Post, Planned Parenthood has requested that a federal judge prevent the governor’s order from going into effect.

“I canceled Planned Parenthood’s contracts to make sure they weren’t getting taxpayer dollars from the state of Louisiana,” Jindal said in a video about the lawsuit posted on his Twitter account.

Spokesmen for Planned Parenthood have called the videos “heavily edited,” and have denied that the organization makes a profit from its tissue donation program.

“This political grandstanding could have real and devastating consequences for the women, men and young people who rely on us,” Cecile Richards, chief executive of Planned Parenthood, said in a statement provided to The Hill. “And that’s why we’re going to fight this with everything we’ve got.”

The Daily Signal previously reported that when demonstrators gathered outside the governor’s mansion to protest his decision to defund Planned Parenthood, his staff played the Center for Medical Progress videos for them.

The sale of fetal human body parts is a felony in the United States.