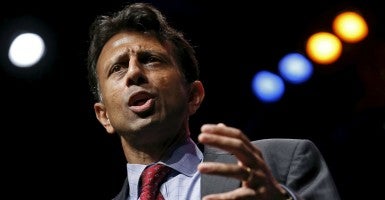 Louisiana Gov. Bobby Jindal played undercover videos of Planned Parenthood executives for pro-choice demonstrators that had gathered outside of the governor’s mansion Thursday.

Planned Parenthood of the Gulf Coast planned the rally to protest Jindal’s decision to terminate the state’s Medicaid contract with the organization.

Jindal ended the contract in light of videos released by the Center for Medical Progress depicting Planned Parenthood officials discussing the sale of fetal organs at the organization’s affiliates.

Spokespersons for Planned Parenthood have denied wrongdoing, and condemned the Center for Medical Progress as “anti-choice extremists” and their videos as “heavily edited.” They have said they donate rather than sell “fetal tissue” to researchers.

Jindal announced Thursday his office would play the videos for the protestors.

We will play the videos on a screen outside the LA Gov. Mansion so those protesting my decision to defund Planned Parenthood know why.

In addition to executives discussing the sale of fetal body parts, some of the videos are graphic, depicting clinic staffers dissecting fetal remains.

In a statement, Jindal said, “Planned Parenthood supporters are welcome to protest. We will have a screen set up outside the mansion to display the Planned Parenthood videos. We hope the protesters will take a minute to watch them so they’ll have an opportunity to see first-hand our concerns with Planned Parenthood’s practices.”

Aides for Jindal’s office played the videos on screens outside the governor’s mansion.

The Advocate reports that “only about 50 people gathered in a field across the street from the governor’s mansion for the protest.”

Planned Parenthood is currently under investigation in Louisiana.