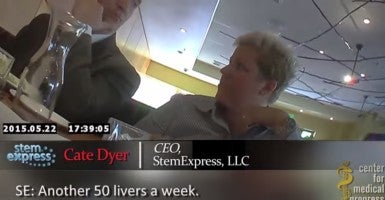 The Center for Medical Progress has condemned a Planned Parenthood-commissioned analysis that claims the undercover videos released by the organization did not “present a complete or accurate record of the events,” according to the New York Times.

“Planned Parenthood’s desperate, 11th-hour attempt to pay their hand-picked ‘experts’ to distract from the crimes documented on video is a complete failure,” said David Daleiden, the Center for Medical Progress’s project lead for its Human Capital series, in a statement.

According to the Times, Planned Parenthood hired a research firm to examine the videos and turned their findings over to congressional investigators.

“A thorough review of these videos in consultation with qualified experts found that they do not present a complete or accurate record of the events they purport to depict,” the Times reports that an analysis by FusionGPS found.

According to the New York Times, the analysis found “substantive omissions” in both the short clips and the full videos that the Center for Medical Progress has released, and that “the manipulation of the videos” means that “they have no evidentiary value in a legal context and cannot be relied upon for any official inquiries.”

“The absence of bathroom breaks and waiting periods between meetings does not change the hours of dialogue with top-level Planned Parenthood executives eager to manipulate abortion procedures to get high-quality baby parts for financially profitable sale,” Daleiden said.

Politico reported that Fusion GPS “wrote that it is impossible to characterize the extent to which the edits and cuts distort the meaning of the conversations depicted and that there was no ‘widespread evidence of substantive video manipulation.'”

The analysis specifically denies the legitimacy of a clip in the videos that pro-lifers found particularly egregious, an instance where one clinic staffer says “it’s a baby” as they dissect fetal remains, and another staffer replies “another boy.”

“While even Planned Parenthood’s ‘experts’ found ‘no evidence of audio manipulation’ in the recordings, it is telling that Planned Parenthood is trying so hard to pretend that their staff did not refer to a dismembered fetus as ‘a baby’ and ‘another boy,’” responded Daleiden in the statement.

Planned Parenthood’s abortion providers are far more honest about the brutal reality of their work than the paid political consultants at the national office. If Planned Parenthood really wants to disprove the now-overwhelming body of evidence that their affiliates traffick in baby body parts, they should release their fetal tissue contracts with the for-profit company StemExpress for law enforcement, Congress, and all the world to see.

The Center for Medical Progress has released videos of senior executives at Planned Parenthood discussing the sale of fetal organs at the organization’s affiliates.

In a series of statements, Planned Parenthood spokespersons have called the videos “heavily edited” and denied illegal conduct.

According to their website, Fusion GPS “provides premium research, strategic intelligence, and due diligence services to corporations, law firms, and investors worldwide.”

The Weekly Standard reports that Fusion GPS is “an opposition research firm with ties to the Democratic party” with “a history of harassing socially conservative Republican donors.”

In a second statement, Daleiden said:

This post has been updated to include an additional statement from The Center for Medical Progress and The Weekly Standard’s report.