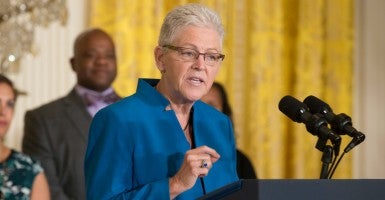 Days after the Obama administration finalized plans to reduce carbon emissions, some climate scientists have criticized the administration for failing to detail how the regulations will lower global temperatures.

These critics suggest the administration used the plan more to inspire global climate action, rather than using it as a concrete step to make the earth cooler.

On Monday, the Obama administration finalized the Clean Power Plan, which would overhaul America’s energy system by striving to reduce carbon emissions from power plants 32 percent by 2030.

Chip Knappenberger, assistant director at the Cato Institute, argues that if the administration’s plan was implemented to perfection, the amount of climate change averted would amount to insignificant levels.

“The Clean Power Plan is only going to avert close to .02 of a degree of future warming over the course of this century,” Knappenberger told The Daily Signal. “What the EPA doesn’t like to advertise is what the mitigation will be.”

Our analysis shows the temperature "savings" directly attributable to the #CleanPowerPlan is 0.009°C. http://t.co/gfB7NjCigF @CatoCSS

“Do you consider one one-hundredth of a degree to be enormously beneficial?” Rep. Smith asked.

“The value of the rule is not measured in that way. It is measured in showing strong domestic action which can trigger global action,” McCarthy responded.

McCarthy’s response indicated the administration’s intention to use the plan as an opportunity to position itself as a global leader in tackling climate change.

Judith Curry, an American climatologist, argued in a blog post that the Obama administration sold the Clean Power Plan as an economic and public health issue, purposely leaving out specific temperature reduction targets.

“The one thing you don’t hear President Obama mention is how much his proposed emissions reductions will reduce global warming,” Judith Curry

“The one thing you don’t hear President Obama mention is how much his proposed emissions reductions will reduce global warming,” wrote Curry. “The social costs of carbon estimates made by the White House require assumptions out to the year 2300 for drastic carbon dioxide reductions to be cost effective.”

The Climate Action Tracker, a project of four environmental research organizations, praised the administration’s plan, but acknowledged that these regulations alone would not affect global temperatures.

“Even if the current national target and the plans are not a sufficient contribution to hold global temperature increase below 2 degree celsius, it shows that the world’s second largest emitter is taking action at home to reduce emissions.”

In December, the United States will join more than 190 nations to discuss a possible global agreement on climate change.

“Frankly I think climate change is sort of a #firstworldproblem,” @PCKnappenberger

Knappenberger argues that the United States’ positioning itself as a climate change leader will have little impact on the way other countries think about energy production.

“Frankly I think climate change is sort of a first world problem; we have the luxury of having plenty of electricity,” Knappenberger said. “In the developing world, where 1.3 billion people currently don’t have any access to electricity at all, they are more worried about increasing their standard of living and increasing the human progress in those countries.”