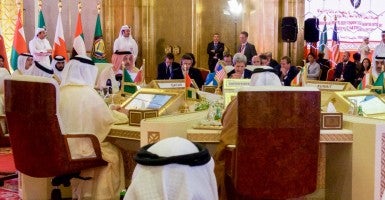 U.S. Secretary of State John Kerry listens to an opening statement in a meeting room at the Sheraton Hotel in Doha, Qatar, on August 3, 2015, amid a briefing about the Iranian nuclear deal for members of the Gulf Cooperation Council. (Photo: State Department/Sipa USA/Newscom / Edited Daily Signal)

The Obama administration has made a big deal over Secretary of State John Kerry’s recent meeting with representatives of the Gulf Cooperation Council, a loose intergovernmental alliance of the Persian Gulf states: Bahrain, Kuwait, Oman, Qatar, Saudi Arabia and the United Arab Emirates.

The White House has spun the visit as a diplomatic triumph and proof that the Iran deal has been endorsed and validated by the Gulf States.

Unsurprisingly, most of the media swallowed this hook, line and sinker.

A more nuanced look at Kerry’s visit in Qatar, however, tells a different story from what the Obama administration has portrayed. In fact, the meeting being held in Qatar is telling in itself.

The reality is that the nations that make up the Gulf Cooperation Council often have problems agreeing on common security policies, but as long as they are dependent on the U.S. for defense against an Iranian threat, the group can be expected to tacitly toe the Obama administration’s line on the Iran deal.

For instance, all the flowery words regarding the Iran deal at the meeting came from Qatar’s Foreign Minister Khalid al-Attiyah.

Qatar is a nation that has consistently balanced a nuanced relationship among the West, its other Gulf brothers and Iran.

In recent years, Qatar’s foreign policy has been to hedge its bets by siding with everyone in the region, rarely taking just one side on an issue or dispute.

This has led to a very inconsistent, and at times confusing, Qatari foreign policy, but one that suits Doha’s interests in the region.

Along with Oman (which has a very sentimental relationship with the Iranian people dating back to the days when the Shah helped the Omani sultan defeat the Dhofar Rebellion), Qatar is the Gulf Cooperation Council member with the closest relationship with Iran.

Both countries share the world’s largest gas field, which plays a major role in Doha’s perception of Tehran.

On the other end of the spectrum, Saudi Arabia, Bahrain and, to a lesser extent, the United Arab Emirates are hawkish in how they see the threat from Iran.

Kuwait tends to fall somewhere in the middle.

Does Iran pose an existential threat to its neighbors in the Gulf and to regional security?

Without a doubt. And the Gulf Cooperation Council members that do not say so publicly will certainly say so privately—even Qatar.

The Iranian ruling elite look down on the Gulf States, many of which they see as nouveau riche artificial Arab states carved out of the former Persian Empire and propped up by Western powers.

At the root of Arab-Iranian tensions in the Gulf is Tehran’s ideological drive to export its Islamist revolution and overthrow the traditional rulers of the Arab monarchs.

This ideological clash has further amplified the longstanding sectarian struggle between Shia and Sunni Islam and is exacerbated by several longstanding Iranian territorial claims in the Gulf.

This will only be made worse as a result of the Iran deal.

The Qatari foreign minister can say what he likes about the deal, but the only voice that matters in the Gulf Cooperation Council is the voice of Saudi Arabia’s King Salam.

As the Custodian of the Two Holy Mosques, and as the ruler of the largest and most important Gulf Cooperation Council member, it is his voice that counts the most on the Arab street.

Until King Salam speaks publicly in support of the deal, you can bet there are serious concerns privately among the Gulf Cooperation Council.