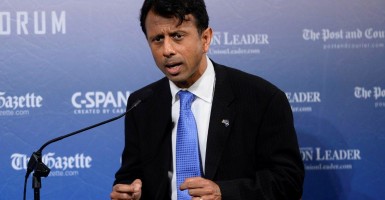 Louisiana’s governor and top health officer this afternoon demanded that Planned Parenthood’s affiliate in their state explain discrepancies in what its officials say about harvesting body parts from aborted babies.

“It is time for Planned Parenthood to stop misleading the state in our investigation,” @BobbyJindal says.

Planned Parenthood Gulf Coast must “reconcile” its claim to the state agency—that it does not donate or sell organs and other body parts—with what its research chief says in a new hidden-camera video about obtaining the best specimens to get a higher price, Gov. Bobby Jindal said.

It is especially concerning given that Planned Parenthood Gulf Coast responded to our investigation with a letter just a few weeks ago claiming its organization does not sell or donate any unborn baby organs or body parts.  After watching the most recent video, it certainly appears Planned Parenthood representatives are being less than truthful in their responses to our investigation so far.

In a letter to Melaney Linton, president and CEO of the Planned Parenthood affiliate, Kathy Kliebert, Secretary of the Louisiana Department of Health and Hospitals, says the undercover video of Farrell said to have been made April 9 appears to contradict the organization’s assertions that it does not engage in the sale or other transfer of aborted body parts.

She goes on to ask nine pointed questions about the extent to which Planned Parenthood Gulf Coast and its associate, Planned Parenthood Center for Choice, receive compensation for donating, selling or otherwise transferring “unborn baby organs or baby parts.”

“It is time for Planned Parenthood to stop misleading the state in our investigation and be honest about the nature of its activities,” Jindal, who is seeking the Republican nomination for president, said in a press release by the governor’s office.

The letter asks for a response by Aug. 14 as “part of an ongoing investigation.” It follows Jindal’s move Monday to end Medicaid payments to Planned Parenthood Gulf Coast under a provider agreement between the organization and the state.

Officials at the national group, Planned Parenthood Federation of America, have denied any wrongdoing by affiliates and continue to dismiss the videos as the heavily edited work of  “extremist” anti-abortion forces.

Extremists who oppose Planned Parenthood’s mission and services are making outrageous and completely false claims. They are engaged in a fraud, and other claims they’ve made have been discredited and disproven.

The footage released today doesn’t show Planned Parenthood staff engaged in any wrongdoing or agreeing to violate any legal or medical standards. Instead, the latest tape shows an extremely offensive intrusion and lack of respect for women, with footage of medical tissue in a lab. These extremists show a total lack of compassion and dignity for women’s most personal medical decisions.

The Daily Signal sought comment from Planned Parenthood Gulf Coast, which operates both of Louisiana’s Planned Parenthood clinics as well as nine in Texas. The fifth in the series of undercover videos from the pro-life Center for Medical Progress was shot in Houston.

A spokeswoman for the Louisiana clinics later emailed the national organization’s statement by Laguens to The Daily Signal but attributed it to the Gulf Coast affiliate’s Linton.

In the wake of the videos released by the Center for Medical Progress, Texas Gov. Greg Abbott also has ordered a probe of Planned Parenthood’s activities in his state.

In a statement today about the new video, Abbott said:

The latest video showing Planned Parenthood’s treatment of unborn children in a Houston clinic is repulsive and unconscionable. Selling baby body parts is the furthest thing imaginable from providing women’s health care, and this organization’s repeated and systematic disrespect for human life is appalling. The state of Texas is aggressively investigating this matter and must use all available legal remedies to address this depraved conduct.

Here is the text of the Louisiana health secretary’s letter today to Planned Parenthood’s Linton:

In your letter dated July 24, 2015, you stated that ‘PPCFC [Planned Parenthood Center for Choice] does not have fetal tissue donation programs in Texas currently’ and that ‘PPCFC disposes of pathological waste through an entity that is licensed for disposal of special waste from health care-related facilities.’

You also answered ‘no’ in response to the question ‘Do any Planned Parenthood Gulf Coast facilities, or any affiliates, subsidiaries or associates thereof, sell or donate any unborn baby organs or body parts?’ As you note in the letter, ‘PPCFC will lease space in PPGC’s new health center located at 4636 S. Claiborne Ave., and PPCFC intends to seek a license to provide abortions at that location.’

These statements directly contradict a recently released video made on April 9, 2015 at the Planned Parenthood facility in Houston, Texas in which Melissa Farrell, director of research at Planned Parenthood Gulf Coast (PPGC), discusses existing contracts for fetal tissue donation for the purpose of research. In one specific contract, she notes that the researcher is requesting 120 fetal cadavers.

[Farrell] also discusses compensatory terms for ‘altering [the] process’ used to extract the baby to ensure more body parts are intact. She explains this is ‘diversification of revenue stream’ and how she can ‘get creative’ for altering the process to ensure that more ‘products of conception’ are usable for fetal tissue research, which ‘we bake…into our contract and our protocol.’

The department therefore requests that you answer the following additional questions:

Please respond to this letter no later than August 14, 2015. This letter is part of an ongoing investigation.