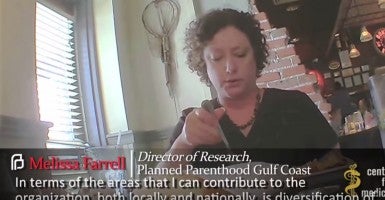 CMP has released five undercover videos exposing Planned Parenthood’s program of selling aborted babies’ body parts—and they promise that more videos are on the way. But it may require lawmakers to get involved to allow the public to see the videos, based on the unfolding court battle.

NAF is a professional association of abortion providers who are dedicated to making “reproductive choice a reality” according to its website. A quick Google search reveals all types of information already available about its annual meetings and the presentations made there. For example, an organization called Gynuity Health Projects describes the panels on which its staff participated at the 2015 NAF annual meeting in Baltimore, with subjects ranging from “Medical abortion service provision: How low can we go?” to “Can we omit the screening ultrasound before medical abortion?”

This makes it a bit far-fetched for NAF to claim that its privacy has been invaded by a video about what happened at these meetings.

Late Monday, Judge Orrick—who along with his wife was a major campaign finance bundler for and contributor to Obama, raising at least $200,000 for Obama’s campaign and contributing over $30,000 to committees supporting Obama—granted a temporary restraining order on the grounds that CMP breached confidentiality agreements with NAF by setting up a fake company and attending NAF’s annual meetings in a bid to uncover potentially illegal activities.

Orrick claims that the videos released so far have subjected the individuals and companies involved to harassment and death threats, and this was “sufficient to show irreparable injury” to NAF if a temporary restraining order had not been issued. The judge set a hearing on the merits for August 27.

This comes on the heels of a California state judge ordering CMP not to release video of a meeting with employees from StemExpress—a company that buys “human tissue, blood and other specimens” from Planned Parenthood.

As we wrote last week, StemExpress’s desire to avoid further ridicule, criticism or scandal for its nefarious involvement in the gruesome harvesting and sale of aborted babies’ body parts does not outweigh the public’s interest in seeing these videos any more than it would if this were a CBS “60 Minutes” undercover sting.

The same can be said of NAF, particularly given the information already available about its annual meetings. And these restraining orders may violate the stern prohibition against prior restraint of free speech outlined by U.S. Supreme Court precedent.

These groups are clearly concerned about what other horrendous details may come out in the yet to be released videos, and dragging CMP into court for breach of contract or invasion of privacy is a stalling tactic.

In light of statements made by Dr. Deborah Nucatola, Planned Parenthood’s senior director of medical services, about the collection and pricing of “intact” body parts from aborted babies in one of CMP’s videos, the U.S. House of Representatives Committee on Energy and Commerce opened an investigation of Planned Parenthood.

In a letter to Planned Parenthood’s president, Cecile Richards, Chairman Fred Upton and Tim Murphy, Chairman of the Subcommittee on Oversight and Investigations, requested information from Planned Parenthood on its consent procedures, tissue collection practices and other related issues, as well as the opportunity to have a staff briefing with Nucatola.

Likewise, the chairman of the House Judiciary Committee, Bob Goodlatte, along with Trent Franks, the chairman of the Subcommittee on the Constitution and Civil Justice, has asked Attorney General Loretta Lynch to open an investigation into whether Planned Parenthood has violated the Partial-Birth Abortion Ban Act. They cite statements in the undercover videos by Nucatola “that raise serious questions about whether abortionists and particularly abortionists in the Planned Parenthood organization are complying” with the law.

On Friday, Charles Grassley, Chairman of the Senate Committee on the Judiciary, sent a letter to CMP’s lawyer requesting “[a]ll video footage in CMP’s possession relating to the provision, acquisition, preparation, transportation and sale of fetal tissue…by PPFA, Planned Parenthood affiliates and associated clinics, intermediary businesses, end-users, as well as any other individuals, entities, and organizations involved in these processes.”

What Lawmakers Can Do

The other action that one or both of these congressional committees should consider taking is immediately to request or subpoena all of the remaining videos from CMP that have not yet been released.

The actions of StemExpress and NAF, who are allies of Planned Parenthood, reveal the tactics that these abortion providers and organ buyers intend to use to prevent or delay the release of these videos: seeking out sympathetic judges who will prevent the further release of videos that severely damage the image of the abortion industry and reveal in gory detail their inner workings.

No federal or state judge has the authority to prevent a congressional committee from holding a hearing at which witnesses—like representatives of CMP—testify about their experiences or where the committee presents evidence it has obtained such as the undercover videos, which could also be posted on the committee’s website.

Such action by Congress may be the only way to ensure that litigation tactics do not prevent the public from seeing the rest of the evidence of Planned Parenthood’s possible violations of federal law, and its hideous practices and procedures.