Major Bank Won’t Do Business With a Florida Gun and Pawn Shop. Is Choke Point to Blame? 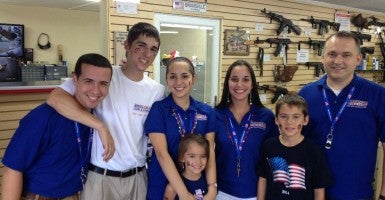 Earlier this month, a small gun and pawn shop owner in Florida appeared to have found himself in the middle of an Operation Choke Point controversy when SunTrust Bank, out of the blue, closed his bank account.

Some, including Steve Champion, the owner of American Gun & Pawn in Brooksville, Fla., were quick to blame it on the fact that he sells guns.

“They told me it was a ‘gun letter’ when I called,” Champion told The Daily Signal in a phone interview on Wednesday.

Soon thereafter, a series of news reports were published, suggesting that his bank account was closed because he sells guns. But according to SunTrust, which has more than 400,000 small business clients, guns weren’t the problem.

“We have decided to discontinue banking relationships with pawn businesses due to the compliance requirements associated with these accounts,” Sue Mallino, SunTrust’s chief communications officer, told The Daily Signal.

Any suggestion that this is a firearms issue is inaccurate.

The same day that SunTrust wrote him a letter stating they were closing his account, he says the bank processed (and cancelled) a $1,500 check he wrote to the National Rifle Association.

Now, questions are arising about whether the account closure is tied to Operation Choke Point.

Operation Choke Point was launched by the Justice Department in 2013 to fight fraud by using regulatory authority to “choke out” certain industries’ by blocking them from financial services that any business needs to survive. The Federal Reserve oversees SunTrust Bank, and is responsible for issuing regulatory guidance and audits on the institution.

“In the course of its investigation of Operation Choke Point, the committee has learned that federal regulators are pressuring banks to terminate relationships with legal yet disfavored industries, without regard to the legitimacy of risk profile of individual companies,” Issa’s letter, dated Oct. 16, 2014, to Yellen said.

There is evidence that the Federal Reserve Board may be operating in a similar manner.

To the public’s knowledge, Yellen never gave the committee the requested documents.

Last week, after suspicion that Operation Choke Point was expanding under the Obama administration, the House Financial Services Committee asked the heads of the Federal Reserve, the Consumer Financial Protection Bureau, the Office of the Comptroller of the Currency and the National Credit Union Administration to “publicly disclaim” their involvement in Operation Choke Point.

“In order to avoid the appearance that your agency is misusing government resources to pursue partisan ends, we request that you publicly disclaim your agency’s past, present and future involvement in Operation Choke Point or any similar operation,” wrote committee leaders. The Federal Reserve and National Credit Union Administration were the only two agencies to meet the committee’s deadline, which was set for close of business yesterday.

“It is not the policy of the Federal Reserve to require institutions we supervise to close accounts of any particular class of business,” Yellen wrote, appearing to to avoid directly disavowing any involvement in Choke Point-like tactics. “The decision to open, close or decline a particular account or relationship is made by a depository institution.”

>>> Read the full response below.

Mallino, speaking on behalf of SunTrust, wouldn’t clarify whether the “compliance requirements” were the result of internal decisions or external pressure from regulators at the Federal Reserve.

A spokesperson for the Federal Reserve also declined to comment on the matter. Critics of Operation Choke Point say there’s no question that SunTrust’s decision was the result of government-issued guidance.

“These financial institutions didn’t unilaterally make a decision not to do business with an entire industry,” said Brian Wise, a senior adviser at U.S. Consumer Coalition, a Washington, D.C.-based lobbying firm that is leading the fight against Operation Choke Point.

These institutions are profit-driven. SunTrust made that decision because of pressure from federal regulators. That undue pressure is essentially the basis for Operation Choke Point.

Wise contends that banks are not to blame, and SunTrust is, too, a victim of Operation Choke Point.

“Everyone wants to blame the banks but if any of us were in the same situation, we’d do the same thing,” he said. “If you have a gun to your head you’re not going to fight.”

As for Champion, he says his account closure might not have been SunTrust’s fault, but believes the bank has a responsibility to defend a good-standing customer’s ability to bank.

“They’re a publicly held company and they should be backing up their customers,” he said.

To bring attention to the issue, Champion is planning a protest on Friday in front of the Brooksville SunTrust that shut him down.

“We’re a legal business,” he said. “I thought discrimination was illegal.”

Champion says he is expecting hundreds of people to attend.