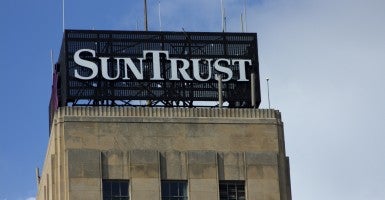 SunTrust Bank is cutting ties with three types of legal businesses in the latest evidence of the Obama administration’s secretive crusade against “objectionable” enterprises.

“It is consistent with long-standing industry practice to review relationships to ensure they satisfy a range of business and risk considerations,” the bank said in a little-noticed press release dated Aug. 8.

In the same blanket notice, however, SunTrust underlined its support for maintaining bank relationships with licensed gun sellers.

Gun dealers, as The Daily Signal previously reported, are among legal businesses targeted in the Justice Department-coordinated initiative known as Operation Choke Point.

SunTrust fully supports all of the rights that Americans are granted under the Constitution, and we continue to maintain banking relationships with licensed firearms dealers.

Mark Calabria, director of financial regulation studies at Cato Institute, a libertarian think tank, suggested that SunTrust released the statement to make clear that the bank is under duress by the Federal Deposit Insurance Corporation as part of Operation Choke Point.

“This admission from SunTrust demonstrates that Operation Choke Point has not ended, but actually expanded while becoming even less transparent,” Calabria said. “More banks should come forward publicly.”

“This admission demonstrates that Choke Point has not ended, but actually expanded.” @MarkCalabria

According to a House committee report, the FDIC, under direction of the Justice Department, has pressured banks and other financial institutions to sever ties to a variety of legal businesses that the Obama administration considers objectionable.

The apparent goal of Operation Choke Point is to deny “high risk” merchants and entrepreneurs access to the banking and payment networks they need to survive.

Pawn shops, payday lenders and gun sellers were among the legal enterprises overtly targeted by the FDIC, according to lists recently taken down from the federal regulatory agency’s website.

In July, after coming under congressional scrutiny, the FDIC removed lists of “high risk” businesses from its website, citing “misunderstandings” in which its guidance led to sudden decisions by banks across America to close accounts with established customers that fell in the listed categories.

Norbert Michel, research fellow in financial regulations at The Heritage Foundation, said SunTrust Bank’s announcement indicates that Choke Point is far from over, and that the program continues to pressure banks to cut ties with legitimate enterprises such as pawn shops. Michel told The Daily Signal:

The FDIC may have clarified its position on dealing with supposedly high-risk firms, but banks and payment processors are still nervous.

Here’s how the three enterprises cut off by SunTrust, and also under government scrutiny, work:

Pawn shops typically offer loans backed by an item of value. If the individual receiving the loan can’t pay it back in time, the pawn shop will keep the item.  Payday loans are small, short-term loans to hold borrowers over until their next payday. Check-cashers are in the business of cashing checks for a fee.

Heritage’s Michel said payday lenders, pawn shops and check-cashers all have been criticized for taking advantage of the poor by charging exorbitant fees or leaving customers in more debt than they started with.

SunTrust declined to expand upon its formal statement.

Despite the FDIC’s removal of their target industry list [from] their website, the stories of countless lawful businesses who have lost their bank accounts continue to pour in through our website, which is proof that Operation Choke Point is not only full steam ahead but increasing its damage to our economy and American consumers.

The Obama administration advocates against racial profiling, yet it discriminates against small businesses.

Wise also leveled a blunt charge of discrimination against the Obama administration, saying:

This administration has advocated against racial profiling, yet it is no more legitimate for the federal government to discriminate against America’s small businesses.

Cato’s Calabria said Operation Choke Point has continued implications for some of the most vulnerable segments of society, which the Obama Justice Department argues it seeks to champion.