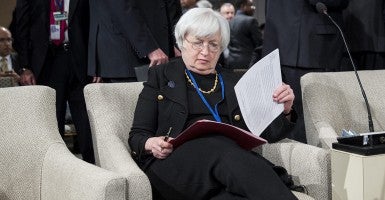 The FDIC, with more than 7,000 employees, is responsible for regulating and auditing more than 4,500 U.S. banks.

According to a May 29 report by the House Oversight and Government Reform Committee, which released the letter, the FDIC is one of the main regulatory agencies involved in executing the Department of Justice-coordinated initiative known as Operation Choke Point.

“The goal of the initiative is to deny these merchants access to the banking and payments networks that every business needs to survive,” the House report said.

After becoming aware that the Ohio bank did business with payday lenders—one of the industries targeted under Choke Point—the FDIC began an investigation into the bank, whose identity was redacted by the House committee.

“As a result, the FDIC and State of Ohio conducted a joint Compliance and Risk Management visitation of your bank as of December 17, 2012,” the FDIC regional director wrote to the bank’s board of directors.

>>> See the Full Letter From the FDIC Below

Issa and Jordan wrote in the letter to Yellen:

The Federal Reserve Board is the primary supervisor and regulator of bank holding companies and state-chartered banks that are members of the Federal Reserve System.  In the course of its investigation of Operation Choke Point, the committee has learned that federal regulators are pressuring banks to terminate relationships with legal yet disfavored industries, without regard to the legitimacy or risk profile of individual companies.

Issa and Jordan’s requests for documents follow demands to Attorney General Eric Holder and the Justice Department for information about the agency’s secretive operation, in recent letters sent by Republicans in the House and Senate.

An editorial Oct. 10 in the New York Times defended the controversial actions taken by the Justice Department and federal regulators against industries that are out of favor with the Obama administration.

Norbert Michel, an expert in financial regulations at The Heritage Foundation, said the newspaper was wrong in its assessment of Operation Choke Point on “many levels.”

“First, third-party payment processors are usually liable for fraud-related chargebacks, so there is a built-in incentive to only sign up legitimate merchants,” Michel said, adding:

It’s true that every single person does not follow the law, but the notion that banks commonly flout federal regulations is absurd. Regardless, the FDIC letter released today is crystal clear. The FDIC openly acknowledged they initiated a compliance investigation for one reason: The bank was processing payments on behalf of payday lenders. It even admits disdain for payday loans.

In the House panel’s letters to Yellen and Curry, they request material about Choke Point “as soon as possible, but no later than 5 p.m. on October 30.”