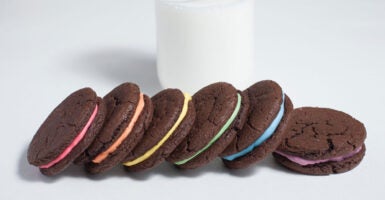 Corporations are increasingly signaling their support for progressive ideology, and are targeting children in the process. (Photo: MichiTermo/Getty Images)

It’s not enough that kids are learning about social justice issues in school or via TikTok. Increasingly, brands have jumped on the woke train to virtue signal to kids what they should think about controversial ideas, normalizing them for the sake of advancing a collective progressive ideology that values identity politics over individualism.

Recently, Oreo posted a tweet that had nothing to do with the classic cookies kids have been devouring with milk for an after-school snack since the early 1900s. The Nabisco brand says, “A loving world starts with respecting others,” followed by a Q&A on why people should use “preferred pronouns” to show respect, tolerance, and love.

The company says its Instagram page on the topic is even more woke, and explains the concept in more detail. The campaign for children to support transgender ideology by using accurate pronouns is subtle, but clear, and no amount of cute, rainbow-style cookie graphics hides it.

The percolation of transgender ideology and the accompanying pronoun debate are rammed into children’s faces every day. With the help of legal organizations such as the ACLU and pro-LGBT groups, public school systems have written the importance of transgender ideology into their curriculum, their school bathroom policies, and more.

No wonder then that Oreo would target this tweet to children, for whom this ad might reinforce messages they hear from trusted teachers elsewhere.

On occasion, even I, a grown adult, will sneak the crispy biscuit with its creme filling just to taste that manufactured sugar burn. But let’s face it: The real consumers here are children, teenagers, and college students—but especially school-age kids.

Even if grown adults were the target audience, it wouldn’t be good, but it wouldn’t influence as many people. Kids are malleable, receptive to advertising, and particularly susceptible to peer pressure.

Tampax, the brand that makes tampons, posted a similar tweet recently—although this one is still more blatant, even given the target consumer age probably is slightly higher. (The average girl gets her first period at around age 12 but can be as young as 10 and as old as 15.)

Although tampons exist solely to enable women to handle their periods discreetly and cleanly, this ad is shockingly explicit in both propagating transgender ideology groupthink and in spreading false information that denies actual biological fact.

There’s nothing true about this ad, and a brand that caters to a woman’s menstrual cycle, of all things, should know that. It’d be like Oreo claiming to be a Gala apple—no way.

The implication, as indicated by the hashtags, is that transgender men—biological girls who want to live as boy—also would have a period despite being a boy. Of course, unless they’ve taken hormone blockers to aid in their transition, they would still have a menstrual cycle, but that doesn’t make them less female or worse, a boy with a period.

In fact, this ad is so off, it’s surprising the transgender community hasn’t expressed outrage with the assertion that a transgender male would have a period. If she did, it would mean she had not yet taken hormone replacements or had surgery to begin her transition.

Confusion aside, it’s obvious Tampax is virtue-signaling to the social justice warriors of society that it too supports the transgender community. Given all its customers are women, it must be extremely “woke,” as the kids say.

There’s nothing progressive about telling millions of people via social media that females aren’t the only ones who have a period. It’s not pleasant, but it is a rite of passage for young girls, signaling that their bodies are growing, maturing, and becoming able to conceive.

Shame on Tampax and Oreo for using brands young people use to push a progressive ideology that’s harmful to kids, science-denying, and generally a product of social justice logic.

Tampax is utilitarian, and Oreo is delicious, and both are widely consumed by young people. To push this ideology onto kids normalizes something that is false, unethical, and just plain incorrect.