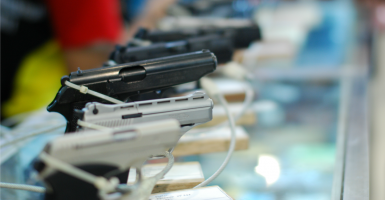 “In order to avoid the appearance that your agency is misusing government resources to pursue partisan ends, we request that you publicly disclaim your agency’s past, present and future involvement in Operation Choke Point or any similar operation,” wrote six Republicans in separate letters addressed to the heads of the Federal Reserve, the Consumer Financial Protection Bureau, the Office of the Comptroller of the Currency and the National Credit Union Administration.

>>> Read the full letter below.

The program has since been criticized for being used to target a number of legal, but politically unpopular industries like gun sellers, ammunition manufactures and payday lenders.

The Daily Signal has reported on a number of small business owners who believe their bank accounts and other financial services were shut down as a result of the Justice Department’s self-titled program.

Since the Federal Deposit Insurance Corporation, which examines and supervises more than 4,500 banks, came under fire for its alleged involvement in Operation Choke Point and was forced to change its regulatory policies, some Republicans believe that other Obama administration agencies like the Consumer Financial Protection Bureau have stepped up their role in implementing Operation Choke Point.

In an exclusive interview with The Daily Signal last week, Rep. Mick Mulvaney, R-S.C., said he is “fearful” that Operation Choke Point is now moving beyond just the Federal Deposit Insurance Corporation’s involvement.

“[W]e request that you publicly disclaim your agency’s past, present, and future involvement in Operation Choke Point,” -@FinancialCmte.

Operation Choke Point was launched by the Justice Department in 2013 as a way to fight consumer fraud by discouraging banks from doing business with industries that regulators considered “high risk.”

Richard Cordray, director of the Consumer Financial Protection Bureau, testified in front of Congress during a March 6 hearing that he was “not aware” of Operation Choke Point “until it burst into public view,” suggesting that his agency is not involved in the initiative.

But critics say Operation Choke Point-like tactics were used by the bureau as recently as March 26 in a lawsuit that was filed against more than a dozen debt collectors faulted for enabling third-party payment processors to commit fraud.

In addition to calling on regulatory agencies to publicly disavow their involvement in the program “or any similar operation,” Republicans also requested in their letters that the banking agencies implement a series of new policies that would ensure that customers’ bank accounts are not closed for political reasons.

These are the same guidelines that the Federal Deposit Insurance Corporation agreed upon after facing backlash by Luetkemeyer, who has introduced federal legislation to end Operation Choke Point.

“Your proactive efforts to require your staff to follow similar guidelines as those issued by the [Federal Deposit Insurance Corporation] would help demonstrate to Congress, the public and the financial institutions that you regulate” that agencies take seriously “the need for transparency and fairness in examinations,” the congressmen said.

>>> Republicans to Government Agency: Why Has No One Been Fired Over Choke Point?

In the wake of reports last week from Florida that gun sellers are still being choked from their bank accounts, the Financial Services Committee said it would continue its investigations into the controversial program.

Members gave the heads of the Federal Reserve, Consumer Financial Protection Bureau, the Office of the Comptroller of the Currency and the National Credit Union Administration until April 15 to issue a response to their timetable in complying with their requests.

The Justice Department has not responded to The Daily Signal’s recent press inquiries regarding the impacts of their program, Operation Choke Point.