Republicans to Government Official: Why Has No One Been Fired Over Choke Point? 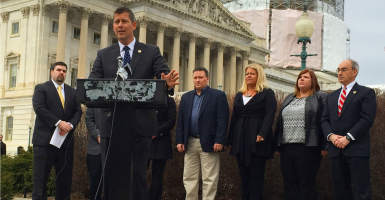 The head of the Federal Deposit Insurance Corporation (FDIC) told members of Congress Tuesday that part of the agency’s involvement in Operation Choke Point was a “mistake.”

“Clearly there was misunderstanding with regards to the list, which was a mistake on our part,” Martin Gruenberg, chairman of the FDIC, said of the agency’s decision to create a supervisory list of 30 “high risk” industries that, in addition to highlighting a number of illegal or outright offensive enterprises like “racist materials,” featured legal merchants such as gun dealers and payday lenders.

But if it was a “mistake,” Republicans asked, why has no one been fired or held accountable?

That was the central question in today’s hearing held by the Oversight and Investigations Subcommittee of the House Financial Services Committee about the FDIC’s involvement in Operation Choke Point.

The FDIC is the primary government agency responsible for regulating and auditing more than 4,500 U.S. banks.

“You’ve known for two years that this was going on,” Rep. Sean Duffy, R-Wis., who chairs the subcommittee, said to Gruenberg. “What have you done in the last two years to address Operation Choke Point or the targeting of these businesses?”

Operation Choke Point was launched by the Justice Department in 2013 as a way to combat consumer fraud by working with multiple government agencies—among them, the FDIC—to discourage banks from doing business with “high risk” industries.

Since its inception, critics say the program is being used to drive industries that are politically unpopular out of business.

A number of small business owners who believe they are “victims” of the government program were present at Tuesday’s hearing.

“I feel saddened that we’ve reached a day and age that our government officials who are supposed to be holding up the Constitution are trampling all over it,” Mike Schuetz, owner of Hawkins Guns in Wis., told The Daily Signal in an interview.

Gruenberg maintains the FDIC has “undertaken a number of actions” to address any lingering impacts of the agency’s “high risk” list, which it has since removed from its official guidance.

“It became clear there was a need to clarify the approach [to regulating banks],” he said.

FDIC Chairman Martin Gruenberg is under fire for what some of his agency’s top officials did in Operation Choke Point. (Photo: Louie Palu/Newscom)

Gruenberg also said that once an investigation that is currently underway by the Office of the Inspector General is completed, the FDIC will take the necessary steps to hold those at fault accountable.

“If there was misconduct, that will be subject to a review by myself and our board at the FDIC,” he said.

But Duffy accused Gruenberg of “slow walking” that investigation and deliberately condoning the targeting of legal businesses.

“It’s pretty clear that Martin Gruenberg is part of this targeting,” Duffy told The Daily Signal in an exclusive interview after the hearing.

“He’s known that this has been going on for years and hasn’t held anyone accountable. I think the reason is that he approves of the targeting of these [industries].”

Not every member of the committee agreed with Duffy. Some Democrats consider Operation Choke Point a laudable program and even went as far as to thank Gruenberg for the agency’s “aggressive” role in fighting consumer fraud.

“Fraudulent transactions are a real issue not to be taken lightly,” said Rep. Al Green, D-Texas. “In truth, this [list] was an attempt by the FDIC to help financial institutions be aware of the higher rates of fraud sometimes associated with certain industries.”

“That’s what [Operation Choke Point] is really about,” he said. “Protecting consumers.”

Other members mocked the hearing, asking Gruenberg if he’s had any “secret” meetings with President Obama in “dark basements” about putting gun dealers out of business.

Green and his fellow Democrats faced strong pushback from Republicans, many of whom shared accounts of their own constituents being shut out from their longtime banks and other financial services, despite the FDIC’s policy changes.

Mick Mulvaney, R-S.C., said he was contacted last week by a payday lender in his district who, after having a “decades long relationship with their bank,” had their account closed.

“People in my district don’t have jobs today because of Choke Point.” [email protected]

“This is real,” Mulvaney said. “People in my district don’t have jobs today because of Choke Point.”

Duffy said that if Gruenberg allows those individuals responsible for the agency’s “mistakes” to continue their employment with the FDIC, then the chairman himself should be held responsible.