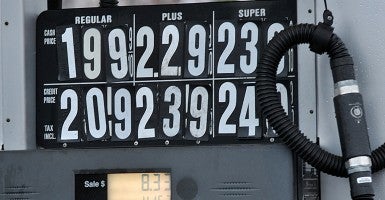 In President Obama’s State of the Union preview, he touted low gas prices as an example of positive economic results. “America is now in a position to really turn the page,” he said and cited in part the fact that “gas prices have dropped.”

No doubt, the plunge in gas prices from $4 per gallon to just over $2 has benefited the economy. Drivers enjoy the cost savings at the pump each week; many families are saving upwards of $400 monthly in lowered fuel costs. Lower energy costs also bolster employment growth as goods can be produced less expensively. As transportation costs decline, retail prices decline as well.

But can the president claim credit for these savings? Not so much.

Recall that during the 2012 presidential campaign, Obama mocked those who insisted that drilling could alleviate the high cost of energy. “…You can bet that since it’s an election year, they’re already dusting off their three-point plans for $2 gas. I’ll save you the suspense: Step one is drill, step two is drill and step three is keep drilling,” proclaimed the president. His rant continued, “We’ve heard the same thing for thirty years. Well the American people aren’t stupid. You know that’s not a plan – especially since we’re already drilling. It’s a bumper sticker. It’s not a strategy to solve our energy challenge…. anyone who tells you we can drill our way out of this problem doesn’t know what they’re talking about – or isn’t telling you the truth.”

In word and in deed, Obama has made no secret of his abhorrence of the oil, gas and coal industries. Through regulation at EPA, through a virtual drilling moratorium on federal lands, and by not building pipelines, the president has done almost everything imaginable to stop domestic oil production. For him to take credit for cheaper energy is like Brandon Bostick taking credit for the Seattle Seahawks going to the Super Bowl.

And make no mistake. Even these gains in private sector production were realized in spite of the Obama administration’s best efforts. Consider the EPA’s Sue and Settle scheme which puts prime private energy-producing acreage off-limits as a result of giveaways to environmentalist groups.

Don’t expect to see any contemporary natural gas and drilling executives showcased as Obama guests at tonight’s State of the Union.  But in the end, the people most responsible for America’s energy revival have been Floyd Farris (of the Stanolind Oil and Gas Corporation) the inventor of hydraulic fracturing and Harold Hamm, the driller in North Dakota who put these new technologies into action creating tens of thousands of jobs.