House Speaker Candidates Get a Warning on Boehner-Obama Budget Deal 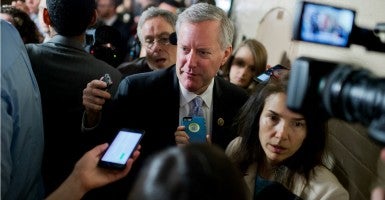 A founding member of the House Freedom Caucus is calling on candidates for House speaker to oppose what he considers “a monstrosity of a budget deal.”

“Anyone who supports this legislation is complicit in supporting ‘the way things are’ in Washington,” Rep. Mark Meadows, R-N.C., said in a statement Tuesday.

“I call on all candidates running for speaker of the House to oppose this legislation and go on record showing they do not support this approach to governing. Now is the time to demonstrate real leadership by committing to ending the culture of governing by crises and to no longer allow the few to make the decisions for the many.”

The proposed agreement would fund the government by lifting the debt ceiling for two years while increasing defense and domestic spending by $80 billion, breaking the caps agreed to in 2011.

It’s unclear whether Rep. Paul Ryan, the leading candidate for House speaker, will support the deal.

Earlier today, Ryan told MSNBC that he is “going to reserve judgment until I can actually see something on paper.” But the Wisconsin Republican had a strong opinion about how the budget agreement was reached: “This process stinks.”

“In the future, we need a better process than the one that’s working if we want to do the people’s business,” Ryan said.

Rep. Daniel Webster, who is also running for House speaker, criticized the deal on policy and principle in an interview with The Washington Times.

“Regardless of whatever the timing is, the process is flawed. I’ve said that over and over and over again,” the Florida Republican said. “This is not the way we should produce legislation. It produces unintended consequences.”

Lawmakers are trying to hammer out a deal before the Nov. 3 debt limit deadline set by the Treasury Department.

Republicans plan to caucus Wednesday for an internal vote for speaker, followed by a floor vote Thursday.