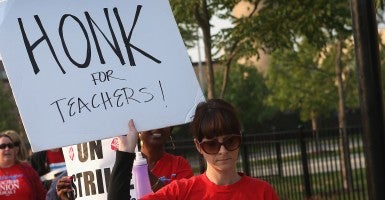 An attorney for Mary Tromette has accused the state teachers’ union of ignoring a state law for more than four decades. (Photo: Scott Olson/Getty Images)

HARRISBURG, Pa.—A law firm representing a Pennsylvania college professor is accusing a state teachers union of ignoring—for more than four decades—a law requiring it to report the use of dues money for political contributions.

Trometter filed a complaint with the Pennsylvania Labor Relations Board in November. Her attorney, David Osborne of The Fairness Center, argues that the NEA letter and PSEA publications supporting Wolf’s candidacy are illegal under a 1970 state law.

The law says unions cannot use organization funds to make contributions in support of a political candidate, and they must report violations to the state within 90 days, he argued.

An open-records request, “despite PSEA’s enormous levels of candidate support over the decades,” found no instance in the past 45 years in which the PSEA reported such contributions, Osborne said in a written statement.

“This is just the latest example of PSEA’s flagrant disregard for state law and abuse of union members’ money, as Mary Trometter’s experience illustrates,” he said.

The PSEA and NEA see the situation differently.

The union disputes the letter and pro-Wolf material included in a PSEA magazine are contributions at all.

In a December filing with the Pennsylvania Labor Relations Board, the PSEA and NEA argued the “common, everyday understanding of a ‘contribution’ is that of something that is given to another, not spending on one’s own speech.”

That filing pointed to the state elections code, saying it allows the union to spend treasury funds to communicate with its members and their families on any subjects, including recommending a candidate for public office.

Andrew Staub is a reporter for Watchdog.org, a national network of investigative reporters covering waste, fraud and abuse in government. Watchdog.org is a project of the nonprofit Franklin Center for Government & Public Integrity.