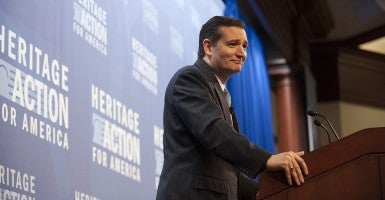 Ted Cruz is ready to bring big change to Washington—one bill at a time.

In doing so, Cruz stressed the importance of the GOP fulfilling the promises it made last election cycle.

“These are extraordinary times,” he said.

“Just last week, walking down the hallway at the capitol, I ran into a janitor carrying a screw driver coming to change the sign on Harry Reid’s door.”

The jab against the former Democrat majority leader brought the room to laughter.

With Republicans now in charge, Cruz said it’s time to embrace a “big, bold positive agenda that says to the American people, you had a referendum and you rejected the Obama agenda.”

Here are the 10 points mapped out in that conservative agenda, which Cruz says he aims to achieve through “piece-by-piece legislation.”

“[Keystone] is an example of partisan politics trumping common sense in this town,” said Cruz on the urgency to pass the Keystone XL pipeline bill, which is supported by more than 60 U.S. Senators. But passing Keystone is not enough, he added. “[W]e need a jobs and energy agenda far broader than that.”

His goals for getting Americans back to work include removing the export bans on natural gas and crude oil, increasing energy exploration and bringing manufacturing and steel jobs back to America.

Cruz wants Congress to do “everything humanly possible” to repeal and replace Obamacare.

Acknowledging that President Obama would likely veto any form of legislation that undermines his signature health care action, Cruz said Congress should pass “piece-by-piece legislation” that would override specific sections of the Affordable Care Act that both Republicans and Democrats can agree upon.

If that doesn’t work, Republicans must “make it absolutely clear where we [the Republican party] stands,” bracing for the 2016 presidential election.

“I have a modest suggestion,” Cruz said. “Perhaps we should move the White House down to the Rio Grande Valley. After all, there can’t be more people climbing the White House fence than there are now,” he joked.

On a serious note, the likely 2016 presidential contender said Republicans have a responsibility to do everything they can to stop Obama’s executive action on immigration, which granted legal status to as many as 5 million illegal immigrants.

Cruz is looking for “real, meaningful oversight” of government. In specific, he addressed the issues of same-sex marriage and religious liberty, criticizing the courts for effectively striking down the marriage laws of 33 states.

“The Constitution makes clear that marriage is a question for the states, it’s not a question for a bunch of unelected federal judges who many disagree with the democratic views of the people who live in the United States of America,” he said.

In what was perhaps the most radical goal proposed in yesterday’s conservative policy summit, Cruz called to abolish the Internal Revenue Service.

“We have seen the weaponization of the IRS, the Obama administration using the IRS in a partisan manner to punish its political enemies,” he said.

“In my view, there is a powerful, populist instinct to take the 110,000 employees of the IRS, to padlock the building, and to put all 110,000 of them down to our southern border,” he joked.

Cruz also supported the idea of a flat tax that is “fair and simple,” adding that Congress may have to wait for a Republican president to accomplish these goals. “If you’re a single mom trying to pay the bills and the cost of everything keeps going up and up and up, and the one thing that doesn’t move is your paycheck every two weeks, you’re feeling the consequence of Washington’s easy money policy,” Cruz said. “We need stable, consistent, strong monetary policy.”

“What we’re doing to our kids and grandkids right now, in my view, is fundamentally irresponsible,” he said. “It’s only in Washington when you say, ‘We should stop piling debt higher and higher on our kids,’ that that statement is viewed as radical.”

>>> There Hasn’t Been One Since 2001. Can This New Budget Chairman Deliver a Balanced Budget?

Cruz said he will focus on repealing Common Core and championing school choice for every student regardless of socioeconomic status.

“Get the federal government out of the business of dictating educational standards,” he said.

“Education is far too important to be governed by unelected bureaucrats in Washington. It should be at the state level or even better, at the local level.”

Cruz warned America has to “deal seriously” with the twin threats of Islamic State terrorists and a nuclear Iran.

Of the recent terrorists attacks throughout the West, Cruz said, “These are not isolated incidents,” adding:

This is a concerted, radical, dangerous attack that seeks to undermine the very basis of free civilization. Look at who they’re targeting—journalists, police officers, children…you cannot win a war against radical Islamist terrorists with an administration that is unwilling to utter the words, ‘radical Islamic terrorists.’ These were not a bunch of ticked off Presbyterians, and we will not effectively combat what we are facing until we acknowledge what we are facing.