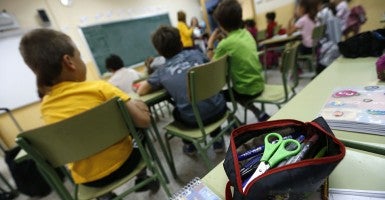 Teachers’ unions in Florida continue to threaten the educational opportunity of thousands of the state’s most vulnerable children.

But there is some good news: Last week, Leon County Circuit Court Judge George S. Reynolds III granted parents of these children the right to intervene on behalf of their children’s scholarships, which are awarded through the corporate tuition tax credit scholarship program.

“All three [of my] children are excelling academically and socially in their respective schools under the scholarships,” said Cheryl Joseph, a mother of three scholarship recipients and one of 15 parents who were granted a motion to intervene in the lawsuit. Cheryl, like the other parents who filed, will not be able to send her children to their chosen school without the scholarship funding.

The first suit claimed that the scholarship violates the “no aid” clause and the “uniform public schools” clause of the state’s constitution by allowing students to take the aid to private schools, some with religious affiliation.

The second lawsuit argued that the expansion of the scholarship program by lawmakers in June violated legislative procedure because it didn’t pass as a standalone measure; rather, the legislation included a variety of education-related topics—including the passage of Florida’s first education savings account program. However, this lawsuit was dismissed by Leon County circuit court judge Charles Francis in September.

The court found that the unions did not have standing to challenge the law, freeing nearly 1,000 students to begin using their education saving account school choice option (Personal Learning Scholarship Accounts in Florida) and allowing the Tax Credit Scholarship eligibility to expand.

Despite this win for educational choice, the unions continue their attack on Florida’s popular Tax Credit Scholarship option by opposing parents of scholarship students’ motion to intervene and the state’s motion to dismiss.

Enacted in 2001, the tax credit scholarships have enabled nearly 400,000 Florida students to attend a school of choice. This year businesses contributed $357.8 million to non-profit groups providing scholarships to 68,761 children to attend a private school of choice—most of whom are low-income minority children. Eligible children are from households with incomes of no more that 185 percent of the federal poverty line.

Under the recently expanded tuition tax credit scholarship program, families at 260 percent of the federal poverty line, or $62,010 for a household of four, will be eligible for partial scholarships during the 2016-17 school year.

The union suit implies that taxpayers are forced to support parochial education through public funds, but this is not the way tax credit scholarships work.

“Scholarship Tax Credit laws are privately administered programs that rely on the voluntary contributions of corporate taxpayers who receive tax credits in return. As the U.S. Supreme Court ruled, these funds never become public funds because they do not ‘come into the tax collector’s hands,’” writes Cato Institute education policy analyst Jason Bedrick.

In the case of Florida, private corporate donations— not public funds— make up the funding for the scholarships. Businesses receive a dollar-for-dollar tax credit for contributions to non-profits that administer the scholarship.

A similar suit was filed by the teachers union in New Hampshire last year. But in August, the New Hampshire Supreme Court unanimously upheld the tax credit scholarship, ruling that the plaintiffs did not have standing because the scholarships were funded through private contributions and could not prove any individual harm caused by the scholarships.

The Florida scholarships allow the most economically disadvantaged children to choose an educational environment that best meets their needs. According to Step Up for Students, the non-profit administering the scholarships, 54 percent of the scholarship children are from single-parent households and have an average household income of $24,067.

These children are succeeding with their scholarships. Research conducted by Dr. David Figlio in 2011 found that students enrolled in the scholarship program performed slightly better than their peers in reading and math achievement levels. Other research suggests that the public schools in Florida are improving because of increased competition from the state’s various school choice options.

It is a disappointment that teachers union heads continue to threaten the educational opportunity of Florida’s most disadvantaged students, despite evidence suggesting academic improvement for students in the program and in traditional public schools. The court was right to grant parents of scholarship students the right to intervene in the suit—it is their children’s future that is at stake.