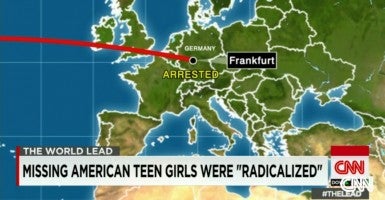 An image from CNN's report on the Colorado girls who flew off to join ISIS. (CNN)

News that three teen-age schoolgirls from the Denver area skipped class and headed off to join the Islamic State terrorist group in Syria isn’t as surprising as it first appears, a national security expert says.

“This is something law enforcement officials are going to have to be on 24/7,” James Carafano, vice president of foreign and defense policy at The Heritage Foundation, told The Daily Signal.  “It’s going to require robust international cooperation and the appropriate, prudent use of domestic law enforcement as well.”

In this case, German authorities arrested the girls–ages 15, 16 and 17–at Frankfurt airport and put them on a plane back to the United States. The trio, who apparently hoped to fly from Germany to Turkey and then make their way to Syria, were questioned by the FBI and released.

CNN reported that the three teens had researched the plan online before departing Friday, visiting websites where radical jihadists such as the Islamic State, or ISIS, discuss how to get to Syria.

Two of the girls are sisters, Americans of Somali descent, according to CNN. They stole $2,000 from their parents, who didn’t know of the plans. The third girl, an American of Sudanese descent, also kept her parents in the dark.

The girls’ families connected after realizing their daughters’ passports were missing. The two families called the FBI, and the agency flagged their passports.

The online activity had not caught the attention of the FBI, CNN reported.

“Islamists have been recruiting in the U.S. for years,” Carafano said today.

The Somali community has long been a target for recruiting by the al-Shabaab terrorist group.  U.S. citizens have been recruited to conduct suicide terrorist attacks in Somalia and Syria.

>>> Commentary: What ISIS Is Trying to Achieve With Slick Videos

James Phillips, an expert on the Middle East at The Heritage Foundation, said ISIS especially has become practiced at using propaganda to entice foreigners.

“ISIS has launched a global propaganda campaign that makes extensive use of slick, web-based videos that hold particular appeal for impressionable young Muslims,” Phillips told The Daily Signal.  He added:

ISIS seeks recruits by offering them the illusion that they can become heroic holy warriors, doing God’s work by creating heaven on earth. But ISIS instead has created a hell on earth in Syria and Iraq.