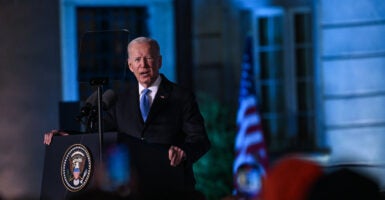 President Joe Biden’s Euro tour this past week played like many a horror movie, where things go from “eerily off” to full-blown crisis in a matter of seconds.

His trip was meant to reassure Europeans that when it comes to beating back Russian President Vladimir Putin, America is in it to win it. What happened was something else entirely.

On the surface, the folksy “Uncle Joe” routine plays well in Europe. Biden’s statements of solidarity, along with his reassurances of U.S. commitment for Ukraine and the defense of NATO, get good press. Most importantly for most European leaders, he never asks them for anything more than they are already willing to do. He is the inoffensive bystander-in-chief.

Trailing behind the likable Biden, however, is a dark shadow. Two perplexing problems pose a nagging worry for the future of the transatlantic community.

One is Biden’s continued penchant for face-planting gaffes that the White House must then explain away. This trip included at least half a dozen, from suggesting American troops would deploy to Ukraine to implying the U.S. would respond to a Russian use of chemical weapons with chemical weapons (which the U.S. does not even have).

It does not help that a national security team that has proven itself subpar backs Biden. Vice President Kamala Harris’ European visit, for instance, looked like the stuff of a “Saturday Night Live” sketch. The White House would be hard-pressed to cite one positive outcome.

As if their halting response to the Ukraine crisis weren’t enough, the word around Washington is that Biden’s dream team is only days away from announcing a new Iran nuclear deal—one that’s even weaker than the last, sure to spark new tensions and conflict in the region, and bound to raise more new questions about the competence of Biden and his advisers.

The second problem is a deeper one than the cognitive abilities of the president and his team’s lack of competence. It’s that they have shown no skill, no ability, to formulate and execute strategy to safeguard the long-term interests of the United States.

More than a year after taking office, Biden boasts a national gender strategy, but still no national security strategy.

The lack of strategic vision is particularly troubling right now. How is the U.S. going to lead after this war to ensure that Putin never troubles us again?

The Russian president remains a military threat and still has energy as a weapon of blackmail, coercion, profit, and influence. Biden doesn’t have a long-term response for either.

And make no mistake—the Chinese Communist Party has taken note of this weakness.

Biden can hope Putin goes away and that renewable energy powers the free world all he wants, but both are magical thinking.

In the end, this trip is a reminder that Americans are led by a tired man of limited ability, backed by a team that is no better at this now than when it worked for President Barack Obama.