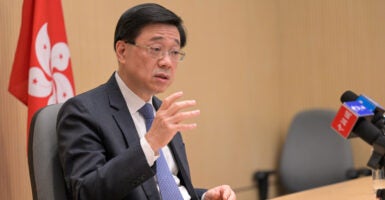 “Lee rose from police inspector under Beijing’s influence to be Hong Kong’s secretary for security, where he led the crackdown in 2019 and ushered in the National Security Law in 2020,” Simon told the Daily Caller News Foundation.

Lee served in the Hong Kong Security Bureau between 2017 and 2021, and was “responsible for the formulation of security policies,” according to his government profile.

Lee tendered his resignation as secretary of administration and announced on Wednesday his intention to run in May’s election, according to the South China Morning Post.

“It should be the people in Hong Kong who choose their next leader, not Beijing. Beijing has taken away Hong Kong people’s right to universal suffrage, a right that is promised to the Hong Kong people in its functional constitution, the Basic Law,” Maya Wang, senior China researcher at Human Rights Watch, told the foundation.

“Lam says she wants to spend more time with her family. There are hundreds of political prisoners in Hong Kong jails who want to be with their families. Her departure doesn’t free them,” said Simon.

“There’s no recovery for Hong Kong from Lam’s term unless political prisoners are released to go abroad, and the courts can regain their independence,” Simon said, referencing the National Security Law.

Rolled out in June 2020, the National Security Law was billed as “preventing, suppressing, and imposing punishment for the offenses of secession, subversion, organization, and perpetration of terrorist activities, and collusion with a foreign country.”

Chang characterized the legislation as “essentially the end of law in Hong Kong.”

“There’s no rule of law anymore,” said Chang. “Hong Kong is a disaster.”

Simon and other employees of Apple Daily were targeted under Lee’s enforcement of the National Security Law.

Along with those of other Apple Daily higher-ups, Simon’s bank account was frozen in August 2020, according to the Congressional-Executive Commission on China, and his former boss, Jimmy Lai, was sentenced to 13 months in prison for holding a vigil commemorating the Tiananmen Square massacre in December, according to The Associated Press.