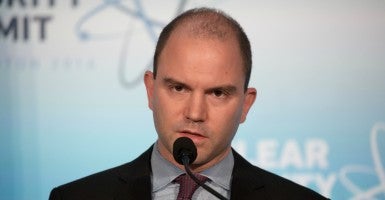 Rhodes, who handles the president’s strategic communications, takes pride in how he sold the Iran nuclear deal to the American press.

In the absence of rational discourse, we are going to discourse the [expletive] out of this,’ he said. ‘We had test drives to know who was going to be able to carry our message effectively, and how to use outside groups like Ploughshares, the Iran Project and whomever else. So we knew the tactics that worked.’ He is proud of the way he sold the Iran deal. ‘We drove them crazy,’ he said of the deal’s opponents.”

Rhodes’s arrogant comments were quoted by Rep. Mac Thornberry, R-Texas, when he introduced an amendment to the National Defense Authorization Act to reform the National Security Council by capping its staff at 100 and taking away its accreted bureaucratic powers.

Under President Obama, the National Security Council is a far cry from the advisory body envisioned in 1947 when President Truman, hired three people to counsel him on foreign affairs.

President Barack Obama has among other failures the debacle of Libya to show for letting the National Security Council run the show.