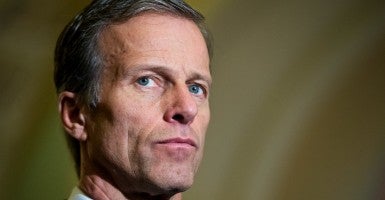 “I think that having a huge bureaucracy always creates problems that are unintended and unanticipated. And this is probably an example of that," Sen. John Thune, R-S.D., said of the TSA. (Photo: Tom Williams/CQ Roll Call/Newscom)

With long wait lines at airports across the country, the chairman of the Senate Commerce Committee is calling on the TSA to “get their act together” and consider more cost-effective and efficient options.

“This has to be fixed. TSA is going to have to raise their game because you can’t have people sitting in lines for four or five hours at this time of the year,” Sen. John Thune, R-S.D., told The Daily Signal’s editor in chief Rob Bluey during a Facebook Live discussion in Thune’s Capitol Hill office on Thursday.

One possible improvement Thune discussed was having private contractors in place of Transportation Security Administration agents. The Sioux Falls Regional Airport, where Thune often flies from, is one of 22 airports across the country that participate in the Screening Partnership Program, which contracts screening services to private companies. These private companies operate under federal oversight and comply with all of the TSA screening procedures.

“And if it can be done more efficiently that way, we should look at doing it that way,” Thune said. “I think that having a huge bureaucracy always creates problems that are unintended and unanticipated. And this is probably an example of that.”

David Inserra, a policy analyst at The Heritage Foundation, has studied TSA issues and joined Rob Bluey for a Facebook Live discussion on Friday in Reagan National Airport to talk about solutions. Inserra said that while most of the airports with private contractors are small, San Francisco International (SFO) is an example of a larger airport that has had success with the Screening Partnership program.

“This isn’t a silver bullet, but we are providing increased efficiency and generally better customer service from all the reports I have read on SFO,” Inserra said.

“For example, the House just passed a bill authored by Rep. John Katko of New York that would expand the use of TSA PreCheck,” Ryan said in the briefing. “PreCheck lanes process twice the number of passengers as regular screening lanes. This also enhances security, because we’re pushing more ‘known’ and ‘trusted’ passengers through these lanes.”

Thune agreed that TSA PreCheck is a good step in quickening the process and said that the TSA must become more efficient.

“South Dakota is blessed because we do not have as much volume, but every airport is experiencing this now,” Thune said. “They’ve just got to do a better job. And they know that. They will have to raise their game.”