The Threat to National Security That Hardly Anyone Is Watching 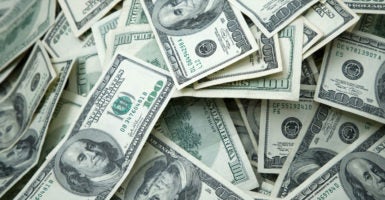 The U.S. now regularly racks up budget deficits in the hundreds of billions of dollars, sometimes approaching and surpassing $1 trillion. (Photo: Kativ/Getty Images)

When I was elected in 2016, the national debt was nearing $20 trillion. The annual structural deficit—meaning how much more the federal government spends than it rakes in—approached $1 trillion.

For many months, tax and regulatory reform has stimulated the economy, producing record federal revenue. Sadly, our deficits continue to rise. With help from Democrats, Republicans spent wildly in the recent omnibus bill. As it turns out, Republicans like to spend other people’s money just as much as Democrats.

I constantly remind my colleagues that our national debt and deficit spending constitute existential threat to the nation. In fact, I recently introduced a resolution with more than two dozen of my colleagues acknowledging that America’s debt jeopardizes our nation’s security.

We are not alone in making this case. President Donald Trump’s national security assessment acknowledges that our national debt is a great hazard. Earlier this year, Secretary of Defense James Mattis stated that “any nation that can’t keep its fiscal house in order eventually cannot maintain its military power.’’

Director of National Intelligence Dan Coats echoed these sentiments: “Our continued plunge into debt is unsustainable and represents a dire future threat to our economy and to our national security.”

Former Secretaries of Defense Leon Panetta, Ash Carter, and Chuck Hagel warned that an “increase in the debt will, in the absence of a comprehensive budget that addresses both entitlements and revenues, force even deeper reductions in our national security capabilities.”

In 2011, former Chairman of the Joint Chiefs of Staff Michael Mullen warned, “I believe the single, biggest threat to our national security is debt.”

The most basic purpose of the federal government is to protect Americans from enemies, foreign and domestic. But in the area of debt, the famous words of the satirical comic character Pogo are apt: “We have met the enemy and the enemy is us.”

We in Congress must recognize the existential threats of runaway spending and surging debt. Otherwise, we will one day wake up and realize that we can no longer fulfill the requisite purpose of our federal government.

Our House resolution calls upon all members of Congress to listen to the warnings of national security leaders from both sides of the aisle, and to take necessary measures now to keep the cauldron of crisis from boiling over.