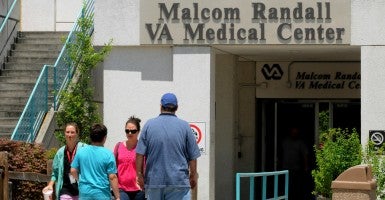 The Department of Veterans Affairs remains embroiled in a scandal that resulted in the deaths of at least 40 veterans assigned to its medical facilities. Now, a report from Sen. Tom Coburn, R-Okla., outlines the actions of numerous VA employees who were suspended for various offenses but continued to get a salary from taxpayers.

This year’s edition notes that taxpayers shelled out $19 million in compensation for government employees placed on administrative leave for a variety of transgressions.

When on administrative leave, Coburn writes, these federal workers are “essentially relieved of their duties including having to report to work or do work” but receive pay and benefits such as health insurance, life insurance and retirement.

The Oklahoma Republican points to 12 specific instances in which government workers were found to have engaged in “unacceptable and sometimes criminal conduct” yet continue to receive paychecks.

>>> Five Factors from the New CBO Report on Veterans’ Healthcare

Half of the examples involve VA employees:

1. Executives at VA clinics nationwide were found to have manipulated wait times for patients to secure bonuses.

Officials attempted to cover up months-long wait times encountered by many veterans before seeing doctors at the VA. More than 40 veterans at one clinic died during such manipulation.

Three officials at a VA clinic in Phoenix–including the director and associate director–were put on paid administrative leave in May as a result of the scandal. The director makes $170,000 a year.

2. A VA drug addiction treatment specialist brought a patient to a crack house and helped him pick up a prostitute.

An employee of the Central Alabama Veterans Health Care System in Montgomery, Ala., helped the patient, who was being treated for addiction, obtain illegal drugs and solicit a prostitute.

Besides exposing the veteran to a “dangerous environment” in March 2013, an investigation found the worker guilty of “patient abuse, misuse of government vehicles, filing false overtime requests and multiple ethics violations.”

The director of the Central Alabama Veterans Health Care System oversaw a clinic that was rife with corruption, including falsifying appointment records and neglecting to read “hundreds of X-rays.”

Director James Talton and the  clinic’s chief of staff were put on paid administrative leave in August. Talton said employees who falsified records were fired, but actually they were “relieved of their duties” and continue to collect a government salary.

4. A “rehab specialist” for VA was indicted for homicide after a fatal car crash while driving drunk.

A grand jury indicted the worker in September for homicide by motor vehicle when a passenger died. The employee was off duty at the time, but his job requires him to operate a government vehicle. His case was sent to human resources, but as of last month he continued to work at the center.

5. A VA employee was charged with sexual assault.

An employee of the VA Southeast Network who worked in Tuskegee, Ala., was placed on administrative leave after he was charged with first-degree sexual abuse of a female patient in an incident in which he fondled the veteran’s breast.

His attorney delayed a preliminary hearing twice, but it was held in August. He will face charges only if indicted by a grand jury that meets next year, the Wastebook says.

6. A VA employee sent lewd messages from government computers, misused a government credit card, and unnecessarily traveled up and down the East Coast.

A February report details the “out of control” behavior of  a VA worker in Nashville who was put on paid leave in March. He resigned in July.

He was found to have sent sexually explicit messages to friends using VA computers, taken 34 trips to Washington, D.C., as well as Florida and New Jersey, and “worked at his own time and pace.” His travel cost taxpayers $109,000.

He also used a “government travel charge card” to: