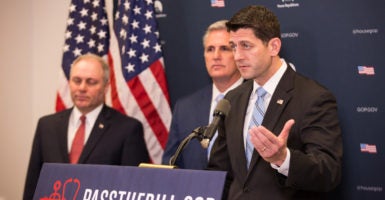 Changes made to the House GOP’s health care bill would prevent veterans from qualifying for the tax credits the new plan creates, according to a health policy expert.

House Republican leaders revealed technical changes to the legislation, called the American Health Care Act, on Monday. But a review of the changes shows that potentially millions of veterans could be ineligible to receive financial assistance to purchase health insurance in the individual market.

“It’s entirely possible this was an unintentional error on the part of staff, but it raises the larger question of what other unintended consequences are lurking in this bill because of the rushed process being used to consider and pass it,” Chris Jacobs, a health policy expert and founder of Juniper Research Group who first discovered the change, told The Daily Signal.

The House Ways and Means Committee, though, says the health care bill leaves in place a regulation that protects veterans’ access to tax credits.

“This amendment makes no change to veterans’ health care,” a committee spokeswoman told The Daily Signal in an email. “House Republicans are committed to ensuring America’s veterans receive the best care available—and any report to the contrary is inaccurate.”

The legislation specifically said that “an individual shall not be treated as eligible for such coverage unless such individual is enrolled in such coverage,” meaning that a veteran would qualify for a tax credit as long as they were not enrolled in VA health benefits, regardless of whether they were eligible.

But Republican leaders made changes to the bill in an effort to ensure it complies with the Senate rules of reconciliation, the budget tool Republicans are using to fast-track Obamacare’s repeal through the Senate.

Under the changes, veterans would no longer qualify for the tax credit if they’re eligible for VA health benefits, regardless of whether they’re enrolled.

According to the federal government, roughly 9.1 million individuals have coverage through VA health programs. Another 8 million are qualified to enroll in the VA’s health system, according to a 2014 analysis from the Congressional Budget Office, but are not enrolled.

Jacobs, who also works as a senior health care policy analyst at the Texas Public Policy Foundation, estimated that roughly 7 million veterans who are eligible but have not enrolled in VA health programs would no longer qualify for a tax credit under the House GOP’s health care bill.

Still, he said that some may not qualify for other reasons, such as their income or enrollment in Tricare, Medicare, or employer-sponsored coverage.

“If this is deliberate, are they trying to divert more people into the VA health care system, when the system is still a mess?” Jacobs said. “It’s overstressed, so why are you diverting people and encouraging them to go into the VA system when it has massive constraints on it?”

The House Rules Committee is meeting to mark up the bill Wednesday, and it’s likely the committee will correct the issue to ensure that veterans can, indeed, qualify for tax credits.

But Jacobs issued a warning to Republicans, as they are expected to vote on the legislation Thursday, seven years after President Barack Obama signed the Affordable Care Act into law.

“What other errors are lurking out here that you don’t know about?” he asked.

This article has been updated to include comment from the Ways and Means Committee.