To Reach Millennials, These Get-Out-the-Vote Ads Go Where They Go 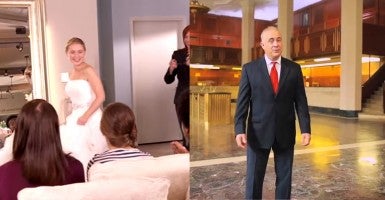 The "Say Yes" and "Care Like Crazy" ad campaigns aim to turn out millennials. (Photos: CRNC [left], Rock the Vote!)

These aren’t your grandpa’s campaign ads.

Two divergent groups — Rock the Vote and the College Republicans — have set their sights on next month’s midterm elections with new ads designed to push the 18- to 29-year-old demographic to the ballot box.

The ads aim to convince young viewers that, from the left-leaning group’s point of view anyway, voters who typically hit the polls for midterm elections might not have millennials’ best interests at heart.

A spokeswoman told The Daily Signal:

The Care Like Crazy campaign is designed to catch millennials’ attention; to inspire them to vote by showing them a range of opinions that could be represented if they don’t vote: indifference toward the environment, pro-restrictive voting laws, anti-women’s equality. These are all issues millennials are passionate about.

Similarly, the College Republican National Committee turned its attention to 16 states for a $1 million digital ad campaign with a bridal theme married to pop culture.

“It’s meant to be a conversation starter,” a CRNC official told The Daily Signal  of the #SayYesToTheCandidate campaign.

On Monday, the #CareLikeCrazy ads from Rock the Vote also will be seen in Atlanta, Columbus, Ohio, and State College, Pa.

The ads also can be found on popular social media and digital sites such as Hulu, YouTube, Facebook, Pandora and Spotify.

Florida, Ohio, Wisconsin and Pennsylvania have competitive gubernatorial races, while races for U.S. Senate in Michigan and North Carolina are relatively close.

The campaign also encourages millennials to take a “selfie” photo or shoot a video and “tell us — What do you #CareLikeCrazy about?” The spokeswoman said:

We wanted to tap into a value millennials hold at their core: self expression. Young people have grown up as digital natives — sharing their opinions on social media platforms constantly.

While wearing the gowns, the women lists benefits that young people can expect should they choose the Republican candidate. If they pick a Democrat, though, they can expect to be saddled with increased tuition, taxes and debt.

The message we wanted to communicate is that [Democrats] are a bad bargain with unforeseen costs and that young people are going to make an important decision about their future. It’s meant to be a conversation starter.

>>> Kentucky Senate Candidates Want You to Know They Care

The CRNC’s “Say Yes” ads were tested before four focus groups nationwide and received an overwhelmingly positive responses from millennials, the group says.

Another series of ads to be released in Florida, Michigan and Wisconsin will feature a student texting various questions to a Democratic politician. The response is “K,” the Wall Street Journal reported.

“This midterm election, the youth vote can be powerful,” said Smith, who is CRNC’s first female chief.

We know young people are looking for an alternative. They’re not inherently liberal. They agree with us. They’re just not connecting those ideas with the party.

Millennials today, she said, are not paying attention to conventional radio and television ads, and don’t connect with direct mail pieces.

Instead, young people turn to digital spaces such as Pandora, YouTube, Spotify and Hulu — where both Rock the Vote! and the CRNC focus their outreach.