Kentucky Senate Candidates Want You to Know They Care 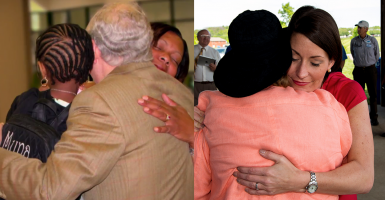 Kentucky’s U.S. Senate candidates have stopped the mudslinging–for now–and are tugging on the Bluegrass State’s heartstrings with ads aimed to show Kentuckians they care.

“I reached out to Sen. McConnell, and he took up my cause personally,” Hunter says in the ad. “I can’t even talk about him without getting emotional. He cares.”

According to The Washington Post, the spot hit the airwaves in the Bluegrass State yesterday with an ad buy in the six figures.

“No matter how negative a campaign is — and this one has been very nasty for a very long time — the final ads that campaigns usually run are positive in hopes of leaving a not-so-terrible taste in voters’ mouths,” Post reporter Chris Cillizza writes of the Kentucky Senate race.

Democrat Alison Lundergan Grimes countered the ad with a series of her own, titled “Alison Cares.”

Andrew Grimes, the Kentucky secretary of state’s husband, kicked off the campaign with a commercial detailing “why Alison cares.”

In a second ad, a Kentuckian named Sylvia Burns discusses Grimes’ commitment to raising the minimum wage and securing equal pay for women.

McConnell and Grimes are facing off in one of several races that could tip the balance of power in the Senate. According to the most recent Reuters/Ipsos poll, McConnell, the Senate minority leader, maintains a lead over Grimes.