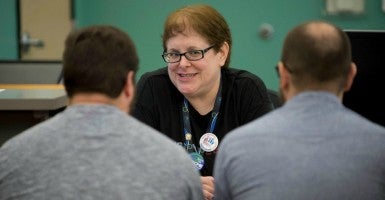 Three Kentucky legislators have filed bills to protect county clerks or religious leaders who say their faith does not allow them to help same-sex couples get married.

“I won’t say people have fear, but there certainly is heightened concern,”  @addiawuchner says.

One bill, announced Wednesday, would shield county clerks from liability if they refuse, citing religious beliefs, to issue marriage licenses to two men or two women.

State Reps. Stan Lee of Lexington and David Meade of Stanford, both Republicans, said in a news release that their bill also seeks to “protect ministers and churches from civil and criminal liability” for declining to marry same-sex couples, the Louisville Courier-Journal reported.

>>> Can Court Clerks Refuse to Do Gay Marriages? How It’s Playing Out

Another Republican lawmaker, Rep. Addia Wuchner of  Burlington, last week introduced a bill to protect religious leaders who will not perform same-sex marriages.

Wuchner said her bill would prevent the state from coercing religious figures or organizations, and would protect them from being sued for refusing to conduct  such weddings.

“I won’t say people have fear, but there certainly is heightened concern about what the U.S. Supreme Court’s ruling really means,” she told the newspaper, referring to the  high court’s 5-4 decision June 26 legalizing same-sex marriage across the nation.

The legislation offered by Lee and Meade follows continued debate in Kentucky and elsewhere about the First Amendment freedom of county clerks and employees to have someone else process a license for a same-sex couple if their faith recognizes marriage only as the union of a man and a woman.

>>> Download the e-book version of “Truth Overruled: The Future of Marriage and Religious Freedom.” (Paperback will be available end of August, but may be pre-ordered.)

“The Kentucky legislation is an important supplement to existing religious-liberty protections in the state,”  Jim Campbell, a senior counsel at Alliance Defending Freedom and director of the Christian legal organization’s Center for Marriage and Family, told The Daily Signal. “It provides an additional measure of protection for county clerks who seek to live consistent with their sincere belief that marriage is the union of a man and a woman.”

The Kentucky chapter of the American Civil Liberties Union filed suit against Rowan County Clerk Kim Davis for stopping the flow of all marriage licenses.

A federal judge on Monday delayed a hearing on the case until July 20 at the earliest, the Associated Press reported, because the ACLU had yet to formally notify Davis of the suit by two gay couples and two straight couples.

“Thomas may very well be a prophet,” he said.

Roger Gannam, a lawyer for Davis and senior litigator for Liberty Counsel, accused the ACLU of being interested only in making a political point:

The ACLU [isn’t] really concerned in the marriages of their clients. The plaintiffs can get married in at least 117 if not 118 counties in the state of Kentucky if they want to. This case was about targeting a person of faith to make a point that everyone must comply with the agenda to impose same-sex marriage on all of America.

Dan Canon, an ACLU lawyer, said the four couples were not targeting anyone but rather want to get a marriage license in the county where they live and pay taxes.

Wuchner’s bill, although not drafted to apply outside a religious setting, also could affect and protect some public officials, the Courier-Journal reported. It would modify a law allowing some judges to “solemnize” a marriage in a religious sense.

“This would not cover clerks, however, and they would still need to issue marriage licenses,” Wuchner said.

This report has been updated.