9 Senate Races That Could Tip the Balance of Power 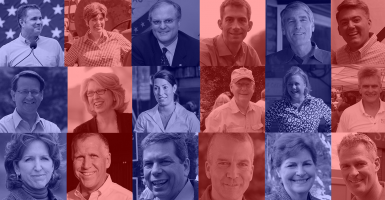 With Congress officially in recess until November, campaign season is in full swing and this fall brings no shortage of competition for control of the U.S. Senate.

Since Republicans need to net just six seats to regain the majority in the upper chamber, Senate races from Alaska to Colorado to New Hampshire command the attention of politicos, pundits and pollsters.

The New York Times, for example, currently gives Republicans a 59 percent chance of taking back the Senate.

Here’s a quick guide from The Daily Signal on the hopefuls campaigning to keep a seat,  oust the incumbent or win a brawl over an open seat in nine of the hot Senate races.

Michigan has not had a Republican in the U.S. Senate for two decades. But with more than $21 million spent so far, this race could be the most expensive in state history. Republican candidate Terri Lynn Land so far has an advantage in outside spending. Campaign quote: “Gary is committed to building an America where anyone willing to work hard and play by the rules can find a good-paying job, afford health care, live in a safe neighborhood, send their children to a good school, and retire with dignity.”

Fun fact: Well into his career, at 34 he joined the Navy Reserve and became an expert marksman with pistol and rifle.

Campaign quote: “I am ready to take my work ethic and experience as a mother, small businesswoman and public official to Washington to show them how government should work for the hardworking taxpayers.”

Alaska, both rural and highly urbanized, has 735,000 residents who are notoriously hard to poll. It has been a battleground for outside groups, which have spent millions seeking to influence national policy on issues from health care to environmental regulations. Education: High school diploma (one of two U.S. senators without a college degree)

Campaign quote: “An independent leader in the Senate who works across party lines … already made an impact as a fierce advocate for Alaska.”

Fun fact: At 18, Begich got a business license to sell jewelry and began helping his mother manage real estate.

Fun fact: Sullivan was recalled to active duty with the Marines for a six-week tour in Afghanistan in July 2013.

North Carolina, with its conservative traditions, has a Republican-controlled state legislature. But liberals are making inroads. President Obama won the state in 2008 and Democrats claim 2.7 million registered voters to Republicans’ 2 million. Campaign quote: “When North Carolinians need one of their own to advocate for them, they turn to Kay because of her common sense, independent, results-oriented record. She’s never been afraid to work hard to bridge partisan divides, and she always puts people before politics.”

Fun fact: Hagan is a former ballet dancer who, as an intern at the U.S. Capitol in the 1970s, operated an elevator used by senators.

Campaign quote: “With a federal government in gridlock and even Republicans unable to get much accomplished, a dose of effective reform conservatism from Thom Tillis is just what Washington needs.”

Republican challenger Tom Cotton has served only one term in the U.S. House of Representatives. Now he is looking to unseat two-term incumbent Mark Pryor, whose father, David Pryor, was governor and  represented Arkansas in Congress for 18 years. Fun fact: In 1996, Pryor was diagnosed with clear-cell sarcoma, a rare form of cancer that almost resulted in his losing a leg.

Jeanne Shaheen, the Democratic incumbent, was New Hampshire’s governor before being elected to the Senate. Republican Scott Brown, briefly Ted Kennedy’s successor as senator from Massachusetts, hopes to unseat Shaheen in a former Democratic stronghold that recently has been a swing state. Fun fact: Shaheen is the only woman in U.S. history elected both governor and U.S. senator.

Campaign quote: “Change for the better.”

If Republicans take back the Senate, the expectation is that Kentucky’s Mitch McConnell, now minority leader, would become  majority leader. But first he must get past Democratic challenger Alison Lundergan Grimes. Although Republican presidential candidates won Kentucky in 2008 and 2012, it leans Democratic at the local level. The state’s coal industry means energy could prove to be a decisive issue.

Fun fact: Grimes used to be a ballet dancer.

Fun fact:  In 1984, the first year he ran for the Senate,  McConnell was the only Republican challenger to win a Senate seat.

With the retirement this year of Sen. Tom Harkin, a veteran Democrat, Republicans see a good shot at picking up a seat in this historic swing state. Relevant background: Member, U.S. House of Representatives since 2007. Lawyer since 1983

Fun fact: Braley met his wife, Carolyn, at an Eagles concert when they were students at Iowa State.

Marijuana may be legal now in the Rocky Mountain State, but citizens of this resource-rich state also are concerned about  their ability to produce energy — an issue an up-and-coming Republican is making his own. Fun fact: Udall comes from an old political family. He is a first cousin of Sen. Tom Udall (D-N.M.), and second cousin of Sen. Mike Lee, (R-Utah). His dad, the late Rep. Mo Udall, ran for president in 1976.

Fun fact:  Gardner converted from a Democrat as a youth to a Republican as an adult.

Democratic incumbent Mary Landrieu has held on in this increasingly Republican state. Whether she’ll be able to defend her record of voting for and defending Obamacare is yet to be determined. Fun fact: At an LSU tailgate party last weekend, Landrieu assisted a young man who was doing a keg stand by pouring beer into his mouth.