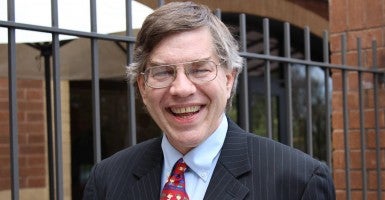 To understand Sean Haugh, know that instead of ending his phone conversation with a Daily Signal reporter by saying “Goodbye,” he implored: “Have fun.”

Haugh, who begins conversations with a “Howdy,” appears to be a gentle, non-confrontational type who doesn’t fit the persona of a third-party candidate threatening to unhinge a Senate race.

Haugh — pronounced haw — is a Libertarian who delivers pizza to pay the bills. He shoots unfunded campaign videos from the basement rec room of his campaign manager’s home, glass of beer a reach away.

So it was true to form that Haugh chose not to prepare any go-to talking point or incriminating accusation for what could be his only chance to debate his major-party competitors in North Carolina’s marquee Senate race.

In fact, he says, he didn’t prepare at all.

His decision to wear a cat-print tie for the occasion was spur of the moment, too.

It’s the morning after his face-off with incumbent Democrat Kay Hagan and her Republican challenger, North Carolina House Speaker Thom Tillis, and Haugh is analyzing his performance.

“Last night, I think of course I won the debate big time,” Haugh says in a phone interview with The Daily Signal. He elaborates:

That’s because of two points: My debate prep was not debate prep. I only practiced the Ebola question and that was because it was a new issue. I’ve been doing this a long time. I have principles, and when you have principles it makes things that much easier. As Mark Twain said, ‘If you always tell the truth, you never have to remember a darn thing.’

The second point? The tie, a Christmas gift from his mother that Haugh says randomly made its way around his neck for his shot at prime time.

“My word, I think the tie will win me the election,” Haugh says.  “I know the only way I can get people’s attention is to be different. I have to give them a reason to consider crossing over.” Haugh wasn’t invited to the first two debates between Hagan and Tllis, who are locked in a close race expected to be one that determines which party controls the U.S. Senate.

He had not met the incumbent Democrat or her Republican challenger before Thursday night’s debate.

Still, Tillis and Hagan have to acknowledge Haugh’s presence, even if he doesn’t force it on them.

Haugh’s resume, by the way, exists beyond pizza.

He is former executive director of North Carolina’s Libertarian Party. He also ran for U.S. Senate in 2002.

“Everything that I said about how this race would play out has been true,” Haugh says.

“I was right all along. The power of a third-party Libertarian candidate is such that If they want to win elections, Democrats and Republicans have to be more Libertarian and peaceful.”

Democrats and Republicans have to be more “peaceful” says @EmperorSean.

The power of Haugh is such that Sen. Rand Paul, the Kentucky Republican with Libertarian leanings, traveled to North Carolina late last month to campaign for Tillis.

Conventional political wisdom holds that Republicans are more vulnerable to losing votes to Libertarians because of their similar views.

But analysts told The Daily Signal that Haugh’s debate performance solidified the notion that he is not a typical Libertarian.

“He has this very granola, earthy personality, which normally appeals to the left,” says Andrew Taylor, a political science professor at North Carolina State University. Taylor adds of Haugh:

He’s liberal on social issues. He said you can marry who you want to. His foreign policy is very dovish. People think a Libertarian hurts a Republican in a close election. I have never been sold on that with Haugh, and I still don’t think so. The peel-off from either side is more evenly split than a typical Libertarian candidate.

Because Haugh might siphon votes evenly from Republicans and Democrats, his impact on the race will be minimal, Taylor predicts.

“He knows he’s not going to win,” Taylor says. “I’d be surprised if he gets more than two to three percent of the vote.”

That may be true, but Haugh’s place in the debate — and the race — forces Tillis and Hagan to interact and compete with him, even if they don’t want to. Sean Haugh says he is a force to be reckoned with in the North Carolina Senate race. (Photo: Sean Haugh You Tube)

Taylor says Haugh had a “calming influence” during the debate, temporarily quieting the conflict and tension that have defined the Hagan-Tillis battle.

“I thought he changed the dynamic a bit,” Taylor says. “He sat there in the middle and I thought he was very thoughtful and forthright. Before the debate, a lot of people thought he is a bit odd. He showed he’s a pretty smart guy.”

Aaron S. King, an assistant professor of political science at the University of North Carolina Wilmington, says he thinks Haugh had less impact.

“I think he had the coolest tie,” King tells The Daily Signal. “But other than that, I think Hagan and Tillis sort of just ignored him. I’m not sure he changed much in the debate.”

“I think he had the coolest tie,” says one political analyst of @EmperorSean.

In his own analysis, Haugh believes he changed the tenor of his more aggressive counterparts, forcing them to engage in a way that appeals more to voters.

“My presence there gave them an opportunity to break away from being artificial,” Haugh says, explaining:

I thought Tillis did that. Tillis told me to please call him by his first name, Tom. Hagan was more determined to stay in character. What seems to help me is that I actually listened to the questions. I tried to engage people on a conversational level.

As he reflects some more, it becomes clear Haugh sees himself not as a sideshow but as a legitimate competitor — but one who won’t change character to win.