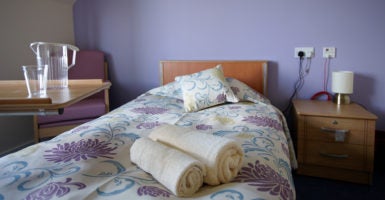 Noa Pothoven said on social media the day before her death: “I will get straight to the point: within a maximum of 10 days I will die." (Photo: Marcus'Photo1/Getty Images)

A teen in the Netherlands died Sunday at her home after requesting to be legally euthanized following years of depression following sexual abuses and rape when she was younger.

Initial reports claimed Noa Pothoven died via legal euthanasia, but it is now being reported doctors ultimately denied her request.

The 17-year-old said that her suffering was “unbearable.” She was reportedly sexually abused when she was 11 and 12 and raped by two men when she was 14, The Sun said.

Pothoven suffered from post-traumatic stress disorder, depression and anorexia. She went to specialists and was hospitalized before she contacted the Life End Clinic in The Hague to discuss being euthanized, according to The Sun.

Children age 16 and younger legally need their parents to consent to be euthanized.

Under the law, children age 12 and older can legally seek euthanization for mental-health reasons. A doctor has to agree that their suffering is unbearable and will continue.

Pothoven said on social media the day before her death, “I will get straight to the point: within a maximum of 10 days I will die,” according to Metro UK.

“After years of battling and fighting, I am drained,” the social media post continued. “I have quit eating and drinking for a while now, and after many discussions and evaluations, it was decided to let me go because my suffering is unbearable.”

The teenager wrote an award-winning autobiography before her death called “Winning or Learning” where she went into her assaults, rape and the issues she faced in the following years.

“Sleep well sweetheart, we will miss you,” she reportedly wrote in the post. “Close your eyes and think of the beautiful place where you will go. We will have to let you go.”

“I breathe, but I no longer live,” the 17-year-old wrote in the social media post before her death.

“Love is letting go, in this case.”s