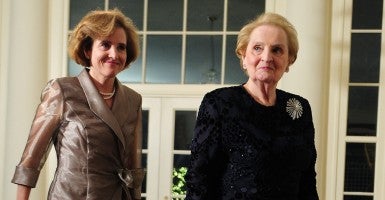 Alice Albright and her mother, former Secretary of State Madeleine Albright, attend a state dinner for China at the White House in 2011. (Photo: Kevin Dietsch/Newscom)

Clients of a high-powered Washington consulting firm appear to have benefited from the outfit’s ties to the Export-Import Bank and the Obama administration, which wants to save the embattled federal agency.

And the consultants at Albright Stonebridge Group, which is headed by a former U.S. secretary of state and bills itself as the “premier strategic advisory and commercial diplomacy firm,” pride themselves on making worldwide connections.

The firm’s chairman and one of its namesakes is Madeleine Albright, who served as secretary of state during the Clinton administration.

Among other roles, Albright Stonebridge Group helps clients with government relations and crafts messaging plans for businesses. It is not, however, a registered lobbying firm, according to records at the Center for Responsive Politics, a nonprofit that tracks how money and lobbying affect politics.

Still, many of ASG’s top officials share a history with the Export-Import Bank and worked with the government agency in a variety of capacities.

The close ties with the Ex-Im Bank paid off for three clients that, collectively, benefited from more than $6.3 billion in financing from the bank between 2009 and 2013: Siemens AG, First Solar and Dow Chemical Co.

“Ex-Im replaces the judgments of the private sector with the judgments of bureaucrats and politicians,” Tim Carney, a Washington Examiner columnist and prominent voice on the bank’s future, told The Daily Signal. “When you do this, you’re tilting the playing field in favor of the politically connected.”

A History of Links to Ex-Im

ASG boasts former and current Ex-Im officials within its ranks, many of whom maintain close ties to the Obama administration. Several ASG officials were tapped for the Obama-Biden transition team after the 2008 election and helped map the incoming administration’s agenda and priorities.

Among those connected to the bank:

Clients of a high-powered DC consulting firm appear to benefit from its ties to Export-Import Bank.

[Article continues after the chart below.]

Lawmakers on Capitol Hill have put Ex-Im under the microscope in recent months as they debate whether to reauthorize the agency. The bank’s charter expires Sept. 30, and its uncertain future has created unlikely allies in Republicans and Democrats on either side of the debate.

Proponents, including President Obama and Sen. Lindsey Graham, R-S.C., say Ex-Im helps small businesses compete in the global market and creates jobs in the United States. In June, the U.S. Chamber of Commerce joined forces with the National Association of Manufacturers to launch a campaign to bolster support for the bank.

Tom Donohue, president of the chamber, is listed as a member of ASG’s Board of Advisers.

The Daily Signal’s repeated requests for comment went unanswered by the chamber.

Ex-Im opponents — led by the conservative chairman of the House Financial Services Committee, Jeb Hensarling from Texas — argue that the bank furthers corporate welfare and cronyism. Outside groups such as Heritage Action for America (the advocacy arm of The Heritage Foundation) and Americans for Prosperity join Hensarling and self-described progressives such as Rep. Alan Grayson, D-Fla., in standing against the bank.

During a committee hearing on Ex-Im this summer, Hensarling criticized the bank’s dealings:

[If] you’re a politically connected bank or something that benefits from Ex-Im, no doubt you would like it to continue. After all, it’s a sweetheart deal for you. Taxpayers shoulder the risk, and you get the reward.

It’s all about the politically connected big businesses getting bigger with help from Uncle Sam. It’s not fair, not necessary, and shouldn’t be a hard decision for Congress.

”If you’re a politically connected bank or something that benefits from Ex-Im, no doubt you would like it to continue,” says @RepHensarling

Under a proposed House measure to fund the government after Sept. 30, however, Ex-Im would be reauthorized for nine months.

Three ASG clients in particular — Siemens AG, First Solar and Dow Chemical — benefited from decisions made by the Export-Import Bank.

The Bank and Siemens AG

According to a press release from Siemens, the duo was hired to consult on “related social and geopolitical issues and the changing balance in the economy.”

Siemens retained Joschka Fischer & Co.’s services through at least 2011, according to a disclosure form filed by a former ASG vice chairwoman, Wendy Sherman. That year, Sherman was appointed by Obama to serve as the State Department’s under secretary of political affairs.

Sherman’s disclosure form, submitted upon getting the presidential appointment, showed she received at least $5,000 in compensation from Joschka Fischer & Co. for its work with Siemens.

After ASG hired Albright and Fischer, Ex-Im financed loans and loan guarantees that benefited Siemens. In July 2010, the bank backed a $134.2 million loan guarantee for the sale of the company’s gas and steam turbine-generators to Korea.

“The investment in our Charlotte manufacturing operation creates more than 1,000 jobs, increases our business with a local diverse, smaller supplier, and significantly expands our export capabilities,” Randy Zwirn, chief executive officer of Siemens Energy Service, said of the transaction.

In January 2012, the bank approved a $638 million loan to finance the sale of Siemens’ gas and steam turbines. The turbines were to be installed in Saudi Arabia.

Last month, the bank supported a pair of loans totaling $65 million for the export of wind turbines manufactured by Siemens.

Siemens, however, has run into trouble with the U.S. government. In 2008, the German company agreed to pay $350 million to the Securities and Exchange Commission and $450 million to the Justice Department as part of a settlement on charges of “paying bribes to foreign government officials to obtain business.”

According to the two federal agencies, a subsidiary of Siemens in Venezuela paid public officials $16.7 million in bribes related to construction of transit lines in the South American country. The construction projects were, in part, backed by Ex-Im funding, since the bank approved two loan guarantees totaling $57 million to “support the export by Siemens Transportation Systems Inc.”

The Daily Signal’s requests for comment from Siemens went unanswered.

The Bank and First Solar

The Tempe, Ariz.-based manufacturer of solar modules received at least $573 million in financing from Ex-Im in 2011, when Alice Albright was the bank’s chief operating officer.

During that time, Sherman – the former ASG vice chairwoman — also served as a consultant to the manufacturing company, her disclosure form shows.

>>> This State Benefits Big from Export-Import Bank. Want to Know Why?

According to the bank’s records, Ex-Im supported several loans for the purchase of First Solar exports in 2011, including a $16 million loan to New Delhi in July. In September 2011, the agency backed two transactions totaling $455.7 million for the sale of First Solar exports to Canada. And in November 2011, Ex-Im approved $84.3 million in export financing for India’s purchase of thin-film solar panels from the Arizona manufacturer.

First Solar did not return The Daily Signal’s request for comment.

The Bank and Dow Chemical

A third client of ASG, Dow Chemical, made headlines for record-breaking financing supported by Ex-Im.

The Michigan-based company bills itself as a “leader in speciality chemicals” that serves the electronics, water and energy sectors, among others.

According to Sherman’s disclosure form, Dow Chemical was an ASG client of hers in 2011.

The following year, Ex-Im supported a record $4.97 billion in financing to the Sadara Chemical Co. for the export of American products to Saudi Arabia. Dow Chemical was one of the exporters supported by the financing through a joint venture with Sadara.

The multibillion-dollar transaction was the largest in Ex-Im’s  history and the federal agency later named it the 2013 “Deal of the Year.”

Tony Fratto, a former spokesman for President George W. Bush and vocal proponent of the bank, refused to comment on the political connectedness of companies that receive financing through Ex-Im.

Hans von Spakovsky, a member of the Federal Election Commission during the Bush administration, was more forthcoming.

“It’s one of the unfortunate aspects of Washington, and the kind of crony capitalism that has developed in this city,” Spakovsky, now a senior legal fellow at The Heritage Foundation, told The Daily Signal, adding:

It makes me wonder whether the firm’s clients got their business because of those ties, as opposed to the fact that their clients were the most qualified applicants who met the objective criteria of the bank.

Ben Chang, spokesman for ASG, reiterated the firm’s services in a statement to The Daily Signal, underlining that they do not include lobbying.

“The Albright Stonebridge Group has had no engagements to approach the Export-Import Bank for any clients at any time,” Chang said. “Albright Stonebridge does not lobby the U.S. government. ASG provides strategic advice and assistance around the globe.”

The White House and ASG

In addition to Ex-Im, top employees at Albright Stonebridge Group maintain ties with the Obama administration. They have attended state dinners and private meetings with the president and his top advisers. They have donated substantial amounts of money to the president’s political campaigns.

>>> Commentary: 5 Facts About the Export-Import Bank for Obama to Remember

During the 2012 campaign, ASG founder Madeleine Albright bundled between $200,000 and $500,000 for the president’s re-election effort. Similarly, Sandy Berger, chairman of ASG, bundled the same amount for the president.

Berger was national security adviser to President Clinton from 1997 to 2001. He gained notoriety for illegally removing classified documents from the National Archives by stuffing them in his pants and socks.

Berger, along with other foreign policy experts, attended a private dinner with President Obama last week on how to confront the Islamic State, the terrorist group in Syria and Iraq also known as ISIS and ISIL.

According to the Public Accountability Initiative, a government watchdog group, employees of ASG donated more than $101,000 to Obama and his campaigns between 2006 and 2012.

In 2011, Madeleine and Alice Albright attended a state dinner for China — another beneficiary of Ex-Im financing — at the White House. Also in attendance was Liveris, CEO of Dow Chemical, according to White House records.

Today, Sherman is undersecretary of state for political affairs, an Obama appointee.

Before joining ASG, Browner directed the White House Office of Energy and Climate ChangePolicy in the first three years of the Obama administration..

After serving on the Obama transition team, Gips headed the Office of Presidential Personnel, overseeing political appointments for the administration.