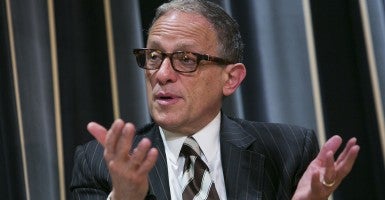 Just weeks before the Export-Import Bank’s charter expires, top bank officials embarked on a nationwide tour designed to drum up support for the agency. Such actions may flirt with anti-lobbying, propaganda and public-relations provisions put in place to protect taxpayers.

Those recent actions are raising concerns for Congress, said Rep. Jim Jordan, R-Ohio. In an interview with The Daily Signal, Jordan said:

We have Commissioner [Fred] Hochberg out in August, a month before the reauthorization runs out … out promoting the virtues of the bank. … It certainly seems like there’s potential concern there. I’m not an expert on the statute, but it would seem there are potential concerns raised.

The federal government began using propaganda to support war efforts in the 20th century. Then, with Ronald Reagan’s election, modern-day presidents began to deploy public-relations techniques as a way to promote specific programs and initiatives.

The annual appropriations act, most recently passed in January, provides a set of guidelines for the executive branch related to public relations and propaganda. It says: “No part of any appropriation contained in this or any other act shall be used for publicity or propaganda purposes within the United States not heretofore authorized by Congress.”

>>> Deal or No Deal: House Republicans Toy with Short-Term Extension of Export-Import Bank

Similarly, the Anti-Lobbying Act prohibits the use of appropriated funds to directly or indirectly attempt to influence a member of Congress or government official to favor or oppose legislation. Hans von Spakovsky, senior legal fellow at The Heritage Foundation, told The Daily Signal that officials confirmed by the Senate, the president and vice president are narrowly exempt from the law under an interpretation by the Justice Department intended to avoid a separation of powers issue.

Congress has worked to monitor executive-branch actions related to public relations and propaganda, and in 2010, the House Oversight and Government Reform Committee released a report examining techniques used by the Obama administration to push its programs. A Nationwide Tour on the Eve of Expiration

Hochberg, Ex-Im’s chairman and president, Wanda Felton, the bank’s vice chairwoman, and Patricia Loui, Ex-Im’s board director, led forums throughout August designed to “increase awareness among American small businesses of how the Export-Import Bank can help them boost their exports abroad, while creating jobs here at home,” Hochberg said in a press release detailing the tour.

The trip came at a time when the bank faced scrutiny for overspending its travel budget by more than $3 million since 2012. A review of Ex-Im’s financial statements—available in the bank’s annual reports—found that funds are not allocated specifically for travel, but rather details only “appropriations received.”

Ex-Im’s small business tour came at a time when the bank faced scrutiny for overspending its travel budget by $3 million.

During that time, Ex-Im officials took 400 first-class flights both domestically and abroad, documents obtained by the Washington Examiner found. Officials flew first class on two domestic flights because of “unavailability of coach class fares or space.” For two others, first class was chosen for “other reasons in the best interest of the bank.”

Bank officials denounced claims of Ex-Im’s busting its budget and said the multi-million dollar overages were because of a “mid-year reallocation of funds.”

Additionally, Ex-Im has been the center of debate on Capitol Hill as lawmakers are faced with deciding whether to reauthorize the bank’s charter or allow it to end. It expires Sept. 30.

During its recent nationwide tour, the Ex-Im trio traveled across 10 states and met with small business owners in 32 cities. Lawmakers home for the month-long August recess frequently joined bank officials at the forums.

During stops in Illinois, which were billed as a “road show,” Hochberg and Sen. Mark Kirk, R-Ill., touted the benefits of the embattled agency to local business owners. Supporters of Ex-Im, who include President Obama and Kirk, say the bank helps small businesses remain competitive in the global market and creates jobs in the United States. Opponents view it as an engine of cronyism and corporate welfare.

Kirk co-sponsored legislation reauthorizing Ex-Im for another five years, and, according to the Rockford Register Star, he spoke to the need for Congress to reauthorize the bank at Ex-Im’s stops in the Prairie State.

“We can’t let ideological purity get in the way of an organization that supports the jobs of thousands of people,” Kirk said.

However, a 2013 report from the Government Accountability Office found the agency cannot distinguish between jobs that would exist with or without Ex-Im subsidies. The bank, the report said, should be more transparent when calculating the number of jobs “supported.”

>>> This State Benefits Big from the Export-Import Bank. Want to Know Why?

Still, in his weekly address last month, Obama lauded Ex-Im for helping to create jobs and assisting small businesses. He called on the American people to reach out to lawmakers and encourage them to reauthorize the bank.

Violations of the Appropriations and Anti-Lobbying Acts?

Alden Abbott, deputy director of the Messe Center for Legal and Judicial Studies at The Heritage Foundation, said it is rare for government officials to be prosecuted for violations of the appropriations and anti-lobbying laws, and the Department of Justice has yet to do so in this case.

But recent actions from Hochberg and other bank officials flirt with the line of what is legal and illegal. Abbott told The Daily Signal:

At a time of big deficits, an agency that may not exist [after September] is wasting money on a lot of trips and criticizing Congress. They could’ve saved the money and stayed in Washington, issued explanations and descriptions of what they’re doing nationwide and met with members [of Congress] and staff. They didn’t need to waste money and engage in what looks like lobbying, even if they claim it’s not.

In a 2014 report, the Government Accountability Office said in instances where violations of publicity or propaganda provisions are brought to light, the bureau in question will receive the “benefit of any legitimate doubt.”

Still, Jordan noted that taxpayers are wary of government officials such as Hochberg using their dollars to fund trips across the country. In the case of Ex-Im, he said, bank officials appear to be using taxpayer dollars to drum up support for the bank. Jordan told The Daily Signal:

You can’t let people use your tax dollars to lobby to get more of your tax dollars. That’s what we’re trying to stop. For the Ex-Im Bank and any government agency to use your money to go out and lobby and put their spin on certain issues in an effort to get more money—it’s just not the way it’s supposed to work.

Propaganda is defined as misleading statements intended to promote a cause, and that is exactly what bank officials have been dispensing during their costly cross-country tour. Their misrepresentations about Ex-Im’s importance is made all the worse by the fact that taxpayers are paying to be deceived.

Conservatives in Congress, led by House Financial Services Chairman Jeb Hensarling, R-Texas, are fighting to allow Ex-Im’s charter to expire without any action from the legislative body. Outside groups such as Heritage Action for America and Americans for Prosperity have been diligent in supporting their cause.

But Democrats and organizations such as the U.S. Chamber of Commerce and the National Association of Manufacturers have mounted a campaign to extend the bank’s life for several years.

Hochberg, meanwhile, has not shied away from criticizing Congress for its inaction on the bank thus far. In posts to his blog, Fred’s Thread, on Ex-Im’s website, the chairman has written frequently this summer on the need for Congress to reauthorize the bank. On Aug. 21, as he wrapped up the cross-country tour, he wrote:

While I remain optimistic that Congress will reauthorize Ex-Im by its September 30th deadline, the clock is ticking on the entrepreneurs and workers who depend on access to global markets for job growth and the survival of their businesses.

Two months earlier, on June 5, Hochberg said the “remarkable progress we’ve made as an engine of U.S. exports, U.S. jobs, and U.S. leadership on the world stage will grind to a halt” if Ex-Im’s charter is not extended.

>>> Export-Import Bank Goes Under the Microscope for Allegations of Fraud, Corruption Though Hensarling has been a staunch opponent of the bank, reports surfaced last week he was in talks for a deal with House Speaker John Boehner for a short-term reauthorization of the bank.

David Popp, a spokesman for the Financial Services Committee, refuted the claims.

Jordan, though, said it’s important for members to look at what’s going on within Ex-Im, specifically in recent months.

In addition to the nationwide tour on the eve of the bank’s expiration, four Ex-Im officials are currently under investigation for bribery. Johnny Gutierrez, who was fired from his position, invoked his Fifth Amendment right at a Financial Services subcommittee hearing led by Jordan.

“[The bank] benefits a handful of companies,” Jordan said. “The government is picking winners and losers, and the government is making money for a select few. It’s the potential for corruption when you’ve got big government handing out $25 billion in loans and loan guarantees and assistance to foreign companies who buy American exports. When you’ve got all that, it invites the potential for corruption.”