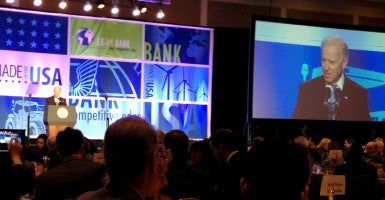 As the Export-Import Bank’s future continues to be a topic of intense debate among lawmakers on Capitol Hill, two of the most prominent voices for and against the bank went head-to-head this week to debate whether the government agency should be ended for good.

The 80-year-old bank provides taxpayer-backed loans and loan guarantees to foreign countries and companies. The Export-Import Bank’s charter expires Sept. 30, and lawmakers are debating whether to reauthorize it or allow it to end.

But its supporters, who list Fratto, the U.S. Chamber of Commerce and President Obama among their ranks, say the bank is a champion of small businesses and helps create jobs in the United States.

“Ex-Im is actually additive, very narrowly scoped, it’s limited, it’s only used in key sectors and in key countries where there are imperfections in the availability of private credit,” Fratto said.

Moderated by Politico’s chief economic correspondent, Ben White, the debate dissected the biggest points of contention surrounding the bank. Here are a few of the key disagreements that had Carney and Fratto’s blood pressure boiling:

Does the Export-Import Bank provide subsidies to big corporations?

Throughout the event, Carney said the loans and loan guarantees the Export-Import Bank provides act as subsidies to U.S. companies that benefit from the agency’s financing — which include some of the world’s biggest businesses, from Boeing to General Electric to Caterpillar. According to Carney, the Export-Import Bank provides “free money,” as one Wall Street employee said, to big banks and companies that can back and provide such financing themselves.

Fratto, though, vehemently disagreed with Carney in calling Ex-Im’s financing subsidies. He argued the bank doesn’t operate at a loss to taxpayers and transferred more than $1 billion in revenue to the Treasury Department in 2013.

They’ve had a negative subsidy on their direct-loan programs. We are really misprioritizing our concerns right now.

With the bank’s reauthorization fast approaching, should Congress tackle reforms to the agency?

Fratto exuded confidence when asked if Congress will reauthorize the bank in September and said it is likely Ex-Im will live to see another five years. It’s possible, though, Congress will include Ex-Im’s reauthorization in a continuing resolution funding the government in September. If members decide not to pass the continuing resolution, another government shutdown could occur.

Some Republicans believe reforms should be made to the bank before it’s completely ended. When the bank’s charter was up for reauthorization in 2012, Congress called for a number of reforms. However, the bank did not make them.

“All these little reforms, they never end up working out. Any reforms that I would approve of as an aptly measure involve dramatically shrinking the agency,” Carney said.

If reforming the bank was inevitable, Carney said he would shrink the agency and only allow small business loans to be issued until they could be transitioned to another government agency.

Fratto, to the contrary, said he the bank is already shrinking as other export agencies are expanding the meet the global market’s demands. In the future, the former Bush spokesman said he would like to see the Export-Import Bank perfect its pricing: “We should always be looking for better ways to be a lot more sophisticated in ways we measure risk and how we can account for the price of risk.”

Ex-Im supporters’ main argument in favor of the bank is that it helps small businesses remain competitive in a global market, and Fratto agreed. He said:

Exporting as a small- and medium-sized business is orders of magnitude more daunting. It’s incredibly difficult as a small- and medium-sized business today. … It’s daunting for a firm that size to try to find its place in the market, to learn how to do it, to deal with market risk, credit risk, market research, finding customers, logistics, dealing with delivery and the needs of consumers in a global market and where do you start?