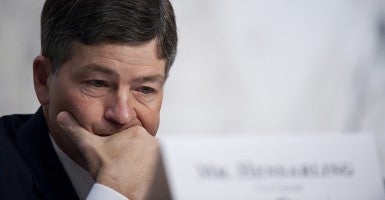 A leading congressional advocate for pulling the plug on the Export-Import Bank today said he “regrets” that a nine-month reauthorization of the federal agency is part of a Republican-sponsored measure to keep the government running.

“I do not believe that Ex-Im should be part of the CR [continuing resolution]. I regret that the Republican conference is putting it there,” House Financial Services Chairman Jeb Hensarling, R-Texas, said in response to a question from The Daily Signal.

The charter of the Export-Import Bank is slated to expire Sept. 30, but a continuing resolution being considered in the House would extend the life of the bank until June 30 next year.

“I am not enamored with this particular continuing resolution,”  Hensarling said after a speech at Hillsdale College’s Kirby Center in Washington.  He added:

If I had my druthers, this would not be what would be before me, but I learned very early on in my congressional career that I don’t get to vote on what I want to vote on. I have to vote on what’s in front of me.

The continuing resolution including the short-term extension for the 80-year-old federal agency was introduced yesterday by House Appropriations Chairman Hal Rogers, R-Ky.

“I do not believe that Ex-Im should be part of the [continuing resolution]. I regret that the Republican conference is putting it there,” says @RepHensarling.

The resolution has yet to be brought to the House floor, and a vote on the resolution expected tomorrow has been postponed.

Hensarling is leading the fight in the House against reauthorizing the bank, which he has called a poster child for cronyism and corporate welfare. But today the Texas Republican said he views the short-term reauthorization as a chance to “decouple” Ex-Im’s expiration date from legislation to fund the government.

“I believe the fate of the Export-Import Bank — it should stand or fall on its own,” he said.

Hensarling originally said he would prefer Congress not act on legislation regarding the agency’s future, and simply allow the charter to expire Sept. 30. His strategy was said to have the blessings of House Speaker John Boehner and other Republican leaders.

However, with so many lawmakers hoping to avoid controversy before this fall’s midterm elections, Hensarling said the delay would allow members to better understand and debate the bank’s future.

“Ultimately, the CR will serve that purpose,” he said. “It’s not the first time I’ve swallowed hard in my congressional career.”

Reports surfaced last week suggesting Boehner and Hensarling were in talks for a deal reauthorizing Ex-Im for a short time. Rep. Jim Jordan, R-Ohio, confirmed the negotiations in an interview with The Daily Signal.

Jordan, though, said today he believes the bank’s charter should expire at the end of the month despite the current terms of the continuing resolution. He told The Daily Signal:

“The House should pass a clean bill to fund the government at current levels while allowing the authority for the Export-Import Bank to expire now. Most of the Ex-Im Bank’s benefits go to big corporations that can afford their own financing without taxpayer help. The bank’s time has come and gone, and now is the perfect time for Congress to end it.”

”The House should pass a clean bill to fund the government … while allowing the authority for the Export-Import Bank to expire now,” says @Jim_Jordan.

Earlier this summer, House Majority Leader Kevin McCarthy, R-Calif., bolstered support for ending Ex-Im when he told Fox News he didn’t support reauthorization of the bank. The move was billed as a win for opponents of the bank, since Eric Cantor, McCarthy’s predecessor as No. 2 House Republican, orchestrated the deal extending Ex-Im’s life in 2012.

Despite the nine-month reauthorization, aides for McCarthy told Politico the majority leader wants to end the bank and plans to work with Hensarling to do so.

Among those supporting Hensarling’s efforts to stop Ex-Im’s reauthorization are outside groups such as Americans for Prosperity and Heritage Action for America, the advocacy arm of The Heritage Foundation. Dan Holler, spokesman for Heritage Action, told The Daily Signal:

Conservatives are understandably wary when Washington promises to fight another day. If leadership is serious about working with conservatives to end Ex-Im, they should make a public, ironclad promise that this is the last reauthorization ever. Absent that promise, it is difficult to imagine this is anything other than a gambit to save Ex-Im and keep the K Street lobbying dollars rolling in from Boeing, GE and the Chamber of Commerce.

The U.S. Chamber of Commerce and the National Association of Manufacturers launched a campaign this summer to support reauthorization of the bank.