How Obamacare Forces You to Subsidize Plans That Cover Elective Abortion 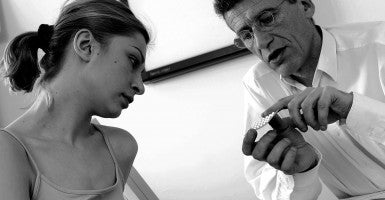 Inside an abortion clinic. (Photo: Newscom)

Throughout debate and final passage of Obamacare, the president and liberal allies in Congress assured the American people that the expansive healthcare law would not fund elective abortions.

“[U]nder our plan, no federal dollars will be used to fund abortions,”President Obama declared in 2009.

The GAO identified 1,036 Obamacare exchange plans across the country that cover elective abortion while remaining eligible for taxpayer subsidies. As Heritage Foundation and others predicted when Obamacare was passed, federal taxpayers in all 50 states are now footing the bill for subsidies for the purchase of health plans that cover abortion. 2. The law’s surcharge accounting gimmick to separate funding for abortion is being ignored.

The healthcare law requires that insurance companies offering elective abortion coverage collect a separate premium of at least $12 a year from individuals to cover the procedures. That money must be placed into a separate account by the insurance issuer, used solely to pay for elective abortions. Supporters of Obamacare say this accounting gimmick separates any federal tax subsidies going to exchange plans from the money used to pay for abortions. But, according to the GAO report, insurers aren’t even following that convoluted scheme.

Many individuals and families may not even be aware that they’re signing up for a plan that includes elective abortion.

>>> Watch: Obama Promises ‘No Federal Dollars Will be Used to Fund Abortions’

None of the 18 insurance issuers interviewed by the GAO actually billed separately for the abortion premium they were charging enrollees and only one itemized the amount on customers’ bills. If insurers are failing to separate payments on the front end, are they ensuring taxpayer-backed subsidies remain separate from payments for elective abortions? It remains to be seen whether the Obama administration will enforce its own promise not to mix tax dollars with abortion coverage.

3. Insurers are hiding the ball when it comes to abortion coverage.

Many individuals and families who would otherwise object to paying for abortion coverage may not even be aware that they’re signing up for a plan that includes elective abortion.

This year, in five states, (Connecticut, Hawaii, New Jersey, Rhode Island, and Vermont) there are no abortion-free plans offered on the exchanges. In 15 other states, where between 2 and 98 percent of exchange plans include elective abortion coverage, individuals will have to wade through summary of benefits materials, insurers’ websites or call individual insurance issuers to figure out which plan is abortion-free.

Even then, the GAO report shows, as many as “[e]leven issuers indicated that consumers shopping for [exchange plans] do not have access to such information.”

Groups on both sides of the abortion debate have complained about the severe lack of transparency on abortion coverage in Obamacare exchanges. The inability to choose an abortion-free plan in some states’exchanges, coupled with the mandatory abortion surcharge, has led at least one family to file a federal lawsuit over Obamacare’s serious infringement on their conscience rights.

Americans really shouldn’t be surprised at this bewildering system of hidden premiums and restricted consumer choice. Obamacare’s capacity to confuse stems from the law’s power to control.

Americans, told that their consciences are of no consequence, are left with few tools to understand confusing regulations written by unelected bureaucrats in search of health care that meets their family’s needs and aligns with their values.

Congress should permanently prohibit federal funding of abortion and ensure transparency in health care. The “No Taxpayer Funding of Abortion Act,”H.R. 7, would ensure that no federal funds could be used to pay for abortion or health benefit plans that cover abortion, including those offered through Obamacare exchanges. The Abortion Insurance Full Disclosure Act, H.R. 3279, would also amend Obamacare to require issuers that include elective abortion coverage on exchange plans to prominently display in marketing and enrollment materials the existence of such coverage.