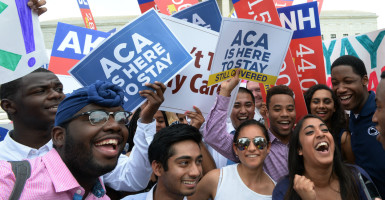 The House on Tuesday failed to override a veto from President Obama striking down a bill that repealed key provisions of his signature health care law and placed a one-year moratorium on federal funding for Planned Parenthood.

The Republican-led House lacked the two-thirds majority needed to override the president’s veto of the legislation, which he issued Jan. 8, and fell short of the 285 votes needed, 241-186. The repeal bill reached the president’s desk early last month, marking the first time legislation rolling back parts of Obamacare passed both chambers of Congress.

Because the veto override stalled in the House, the Senate cannot consider the measure.

“We are taking this all the way to the end of our process under the Constitution,” Ryan, R-Wis., told reporters this morning. “Regardless of the outcome today, this fight will not end here.”

The speaker stressed that the legislation originally passed by both the House and Senate last month forged a “clear path” for repealing the health care law with a simple majority, as Republicans used a tool known as budget reconciliation to avoid a Democratic filibuster in the Senate.

“What we are proving today is, if we have a Republican president next year, we will repeal Obamacare and we will replace Obamacare,” Ryan continued.

Last month, the House passed the Senate’s version of a reconciliation gutting key provisions of Obama’s health care law. The bill was passed using reconciliation, which allows a bill to pass with 51 votes.

The legislation also prohibited Planned Parenthood from receiving federal funding for one year.

The Senate passed the reconciliation bill in December, and the House followed suit early last month. Anticipating the arrival of the bill, Obama promptly issued a veto threat.

Still, conservatives cheered the passage of the repeal legislation, as it was the first time a bill rolling back Obamacare’s most contested measures made it to the president’s desk.

See below how your lawmaker voted on the measure to override Obama’s veto.