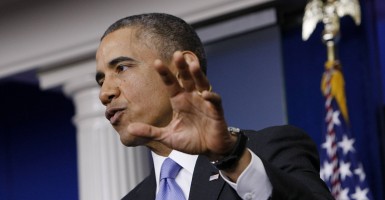 It’s that time of year again. Temperatures are beginning to rise. School kids are itching for the freedom of summer. And all eyes are on the Supreme Court as the nine justices release decisions in important cases by the end of June.

Among the headliner cases the Court will decide this term are the challenges brought by the Green family, who run Hobby Lobby, and the Hahn family, who own Conestoga Wood Specialties. Both families are fighting over the Obamacare mandate that forces employers to provide coverage of abortion-inducing drugs and devices or face crippling fines.

The families are hopeful they will prevail. But even if the Hahns and Greens win their challenge at the Supreme Court this month, Obamacare’s assault on freedom will be far from over. The one-size-fits-all health care law that is trampling on a fundamental freedom through the HHS mandate will continue to threaten the conscience rights of countless individuals and families through other government regulations and mandates.

Take, for instance, Barth and Abbie Bracy. Like many other Americans, the Bracys thought they could trust the president’s promise that if they liked their current health plan, they could keep it. But just a few months after the roll-out of the expansive healthcare law, the Bracys’ insurance company cancelled their policy.

Now, Barth and Abbie will have to look for health insurance on the Obamacare exchange in their home state of Connecticut to avoid fines under the individual mandate. At the moment, it appears all Connecticut exchange plans would require the Bracys to pay an extra premium to cover other people’s elective abortions.

Under Obamacare, individuals who enroll in any exchange plan that covers elective abortion will be forced to pay a surcharge of at least $12 per year—and possibly much more—used solely to pay for abortion procedures. In some states, families and individuals will be able to find abortion-free exchange plans. In other states, such as Connecticut, families may only have the option of enrolling in a plan with abortion coverage and paying the mandatory abortion surcharge.

Worse, many individuals and families who otherwise would object to paying for abortion coverage may not even be aware of the additional charge. Obamacare regulations allow insurers to disclose the existence and amount of the abortion surcharge only at the time of enrollment. That warning may be as little as a single sentence in a massive plan document.

“[F]inding out which plan or plans in a given state do not cover elective abortion is proving to be a nightmare,” said Chuck Donovan, president of the Charlotte Lozier Institute, the research arm of the pro-life Susan B. Anthony List, which conducted an investigation into exchange plan abortion coverage last fall.

As Catholics who believe human life begins at conception, being forced to fund elective abortions is an untenable affront to the Bracy family’s religious freedom.

That’s why the Bracys have filed a lawsuit in federal court over the abortion surcharge, claiming the lack of transparency about abortion in Connecticut’s exchange, coupled with the mandatory abortion surcharge, is trampling on the family’s conscience rights.

You don’t have to agree with the Bracys, or personally oppose abortion, to agree the government shouldn’t force Americans to fund life-ending procedures in violation of their convictions.

“No one should be forced to pay for other people’s abortions,” said Matt Bowman, Senior Legal Counsel for Alliance Defending Freedom, which is representing the Bracys.

“In America, we don’t separate what people do from what they believe, and that’s why Obamacare’s attack on the freedoms of Americans must stop.”

Americans deserve the freedom to choose healthcare for themselves that meets their individual needs, without being forced to subsidize life-ending procedures.

As the country awaits a decision in the Greens’ and Hahns’ fight against the Obamacare HHS mandate, Americans should remain vigilant to other assaults on freedom stemming from the massive healthcare law. Likewise, policymakers should work for health care reform that respects fundamental freedoms and places decisions about health coverage back where they belong—in the hands of the American people.