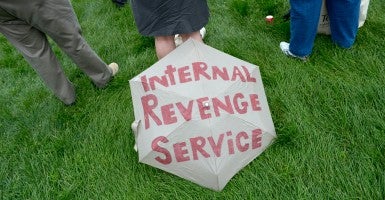 Protesters at the Tea Party Patriots "Audit the IRS" rally at the U.S. Capitol in Washington, D.C., in 2013. (Photo: Shawn Thew/EPA/Newscom)

The Internal Revenue Service, already under investigation for illegally targeting conservative and tea party groups, recently audited the conservative Breitbart News Network in a move that the company says was politically motivated.

.@SenTedCruz called the audit of Breitbart News Network ‘a gross abuse of power.’

The IRS sought the company’s financial records from 2012, Fox News reported earlier today. Brietbart.com relaunched that year with a more robust reporting team. Over the past two years, it has produced hard-hitting stories exposing scandals in the Obama administration.

The news drew a swift reaction from Breitbart’s leaders and prompted Sen. Ted Cruz, R-Texas, to fire off a letter to the IRS demanding answers about the audit.

“For the IRS to behave like a partisan political organization, targeting media organizations whose views differ from the president’s, would represent a gross abuse of power,” Cruz said. “It would undermine the statutory mission and integrity of the IRS. And it would likely subject IRS employees to criminal prosecution.” For more than a year, the agency has faced scrutiny for its illegal targeting of conservative and tea party groups seeking nonprofit status. The IRS also recently agreed to pay a $50,000 fine for wrongfully leaking the National Organization for Marriage’s confidential tax information.

Breitbart’s leaders said they wouldn’t cower under the threat of an IRS audit.

“We will not stop our investigative reporting,” says Breitbart CEO Larry Solov about IRS audit.

“We refuse to be intimidated by any efforts of the IRS to suppress our investigations of the Obama administration, including our ongoing effort to show the American people the fiasco that is our southern border,” said Stephen K. Bannon, executive chairman of Breitbart News Network, told The Daily Signal.

Added Larry Solov, president and CEO: “While we intend to comply fully with the audit, we will not stop our investigative reporting wherever it leads, including the White House.” Fox News reported that the IRS “asked for a litany of documents, including logs of its receipts and expenses, but also its partnership agreement and a ‘written narrative’ of the business.” The agency told Fox News:

Federal privacy laws prohibit the IRS from commenting on specific taxpayer situations. The IRS stresses that audits are based on the information related to tax returns and the underlying tax law — nothing else. Audits are handled by career, non-partisan civil servants, and the IRS has safeguards in place to protect the exam process.

“This media audit, coupled with the recent proposal of 49 Senate Democrats to amend the Constitution to give Congress plenary power to regulate political speech, paints a disturbing picture of a coordinated assault on the First Amendment,” Cruz wrote.

Senate Democrats are currently debating a proposal that would amend the First Amendment by restricting political activity of Americans.

>>> Senate Democrats No. 1 Priority After the Recess? Gutting the First Amendment

Cruz is also seeking the answers to these seven questions from the IRS:

Ever since its founding by Andrew Breitbart, who died in 2012, the news organization has made its mark on journalism. Two of its biggest stories—an undercover video investigation of ACORN and Rep. Anthony Weiner’s lewd tweets—led to the downfall of the liberal organization and resignation of the New York congressman.