Senate Democrats No. 1 Priority After the Recess? Gutting the First Amendment 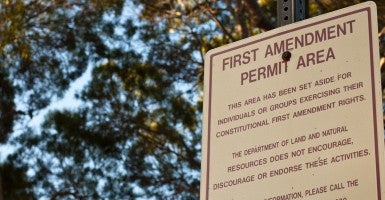 When the Senate reconvenes today, the No.1 legislative priority of Democrats is to pass a resolution that would gut the First Amendment, one of the few times in American history an amendment has been proposed to cut back on part of the Bill of Rights.

It’s probably no surprise they want to restrict political speech that could threaten their incumbency, but it is a bit ironic coming just a little more than one week before Constitution Day on Sept. 17.

So, the Senate and the House of Representatives return from a month-long recess and, with everything happening in the world at the moment, the legislative schedule set by Sen. Harry Reid, D-Nev., for Sept. 8, available here on the website of the “Democrats in the U.S. Senate,” includes consideration of a few nominations but lists only one legislative item: a motion to invoke cloture (end debate) on S.J.Res. 19.

This resolution would ‘give political speech less protection than the First Amendment now gives to movies, novels, comic books’

This resolution, sponsored by Sen. Tom Udall, D-N.M., and 47 other senators (without a single Republican member), would amend the First Amendment to give Congress the power to limit fundraising and spending on political speech and political activity. The relevant language says that “Congress and the States may regulate and set reasonable limits on the raising and spending of money by candidates and others to influence elections.”

As explained in a Heritage Legal Memorandum, the language of this resolution is so broad, and so unlimited, that it would give the government essentially absolute power to restrict spending on almost any speech and activity that it decides might “influence elections.” There would be almost no limit on what the government could do. If ultimately ratified and implemented, the amendment would restrict core free speech protections for all Americans – which Minority Leader Mitch McConnell, R-Ky., has called “scandalous.”

Supporters of this amendment want to overturn the 2010 Citizens United decision, in which the Supreme Court said that Congress cannot restrict independent political expenditures. Democrats claim restrict­ing the amount of money that may be raised and spent on politi­cal speech and activity is not the same as limiting speech, but as the Supreme Court has recognized, bans on spending are indeed bans on speech. No one with any experience in public advocacy or the prac­tical problems of running for office or managing a campaign possibly could claim that one can engage in political speech or political activity effectively without the funding required to support such efforts and distribute such communications. Law professor Ron Rotunda of Chapman University, the co-author of a 6-volume treatise on constitutional law, says this resolution would “give political speech less protection than the First Amendment now gives to movies, novels, comic books and Nazis marching through Skokie, Illinois.” He says Thomas Payne, the anonymous author of the foundational Common Sense, “would be flabbergasted” that “the Government he helped create” would have “the power to ban the pamphlet that led to its creation.”

In testimony before the Senate Judiciary Committee in June, Floyd Abrams, one of the foremost First Amendment litigators in the country, sounded the alarm about this amendment, saying it “is intended to limit speech about elections and it would do just that.” Abrams added that the resolution “would shrink the First Amendment and in doing so set a precedent that would be both disturbing and alarming.”

It is quite disturbing and alarming that nearly 227 years after the signing of the Constitution on Sept. 17, 1787, 48 U.S. senators led by their leader, Harry Reid, are proposing to restrict the First Amendment. This is an ignominious attempt by a group of senators to protect their own incumbency at the expense of a fundamental right guaranteed in the Bill of Rights to all Americans.