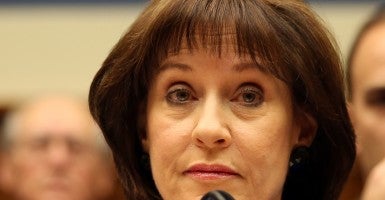 It’s been one year since Lois Lerner officially retired from the Internal Revenue Service amid accusations that the tax agency improperly had targeted tea party and other conservative groups. Now, Lerner is speaking out and offering no apologies for her role in the scandal.

“I didn’t do anything wrong,” Lerner told Politico, echoing the few words she uttered to a congressional panel investigating the targeting. “I’m proud of my career and the job I did for this country.”

>>> Commentary: Politico Found Lerner. So Why Can’t the U.S. Attorney?

Breaking her silence in the news media since the story of the IRS’s aggressive scrutiny of conservative groups broke more than a year ago, Lerner defended her tenure.

“Regardless of whatever else happens, I know I did the best I could under the circumstances and am not sorry for anything I did,” she told Politico.

“…I did the best I could under the circumstances and am not sorry for anything I did,” former IRS official Lois Lerner tells Politico.

While she was head of the IRS division overseeing tax exempt organizations, right-leaning groups were forced to answer invasive questions on applications and waited years before receiving action on their request for tax exempt status. That unusual scrutiny that prompted dozens of congressional hearings and an ongoing investigation into whether Lerner was operating on her own or under orders from the White House.

>>> In Depth: Why Americans Should Be Concerned About the IRS and Political Bias

Lerner began working at the IRS in 2001 after  20 years at the Federal Election Commission. She had limited knowledge of tax law and IRS operations.

“Her fuse was short, and if you come to the IRS, you better be able to sit and listen and ask questions and absorb and rethink,” Debra Kawecki, an attorney who worked with Lerner until 2006, told Politico. “And she had a hard time doing that.”

In 2006, Lerner took over the tax exempt organizations division.

In several emails, Lerner supported legislation by Rep. Chris Van Hollen, D-Md., to require more disclosure from political groups receiving tax exempt status. Similarly, she commended the writer of a June 2012 email about how states created their own disclosure rules in the wake of the Citizens United decision.

“You done good!” Lerner wrote. “Now, if you can only fix the darn law!”

Lerner, though, contended in the Politico interview that she is  “not a political person” and said she has a history of supporting candidates across the political spectrum.

Larry Noble, Lerner’s former boss at the FEC, agreed and said she was “never partisan.”

However, FEC Commissioner Lee Ann Elliott and Craig Engle, who worked with Lerner at the FEC, said ideology affected her work.

“Lois’ ideology is against money in politics, is ‘anti-contribution;’ that’s her bias,” Engle told Politico. “Her ideology inhibited fair administration of the law.”

On May 22, 2013,  Lerner invoked her Fifth Amendment right not to incriminate herself before the House Oversight and Government Reform Committee. According to Politico, the IRS placed her on indefinite administrative leave.

Last March, Lerner pleaded the Fifth once more before the House Oversight Committee. Afterward, the entire House voted to hold her in contempt of Congress..

Congressional investigators have released emails from Lerner in which she refers to conservatives as “crazies” in addition to a vulgar anatomical term.

Lerner and husband Michael Miles, a lawyer, said such messages were taken out of context.

>>> Commentary: The Latest Clue That the Justice Department Investigation of the IRS Scandal is a Sham

The bulk of Lerner’s emails sent between 2009 and 2011 — the period when conservative groups were targeted — were reported lost after what the IRS said was a computer crash three years ago. The agency only told lawmakers of the crash in June.

Some House Republicans and other critics contend the IRS tried to cover up the contents of the emails. Lerner, though, rebuffed the idea that she crashed her own computer.

“How would I know two years ahead of time that it would be important for me to destroy emails,” she said, “and if I did know that, why wouldn’t I have destroyed the other ones they keep releasing?”

Several emails obtained by congressional investigators show Lerner became aware that tea party groups faced additional scrutiny in 2010 and attempted to correct the agency’s “be on the lookout” criteria when she found out about it in 2011. IRS employees, Politico reported, continued the practice.

Some congressional Republicans have called for the appointment of a special prosecutor. Lerner’s allies, though, call her a scapegoat.

“You could take her out of there and just stand in a different person, and no matter who it is, we would have the same result,” Karen Gries, a tax lawyer who previously worked with Lerner, told Politico. “I don’t believe this is reflective of Lois the individual or Lois the professional.”

Lerner told Politico she struggles to find employment and has received a multitude of hate mail and death threats. Federal agents were called to protect her at home following one threat. Her two daughters and mother-in-law also received “hate calls.”

Lerner staunchly told Politico that the public was hearing only one side of the story. Asked if “she could tell the world anything,” she said: