EPA Is Desperately in Need of Budget Cuts. Here’s a Few Places to Start. 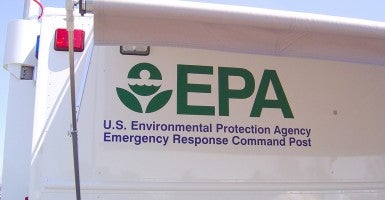 Of late, it seems the Environmental Protection Agency has been acting like a misbehaved child—recklessly doing what it wants at the expense of others without any supervision. And just as parents punish children by taking away their allowance, Congress should do the same to the EPA and cut its budget.

Cutting the EPA’s budget does not mean a world of unchecked polluters and environmental degradation in America. Tightening the agency’s purse will rein in the EPA’s heavy-handed, unilateral reach into the economy.

EPA’s $8 billion-per-year budget has remained steady through the last decade, (see table 5.1) with some significant peaks from the Obama stimulus package. But the EPA has a disproportionately large impact on Americans in terms of both freedom and economic burden that is passed on to states, localities and individuals. It issued 21 major regulations with annual compliance costs of $37.8 billion in President Obama’s first term alone.

Shrinking the EPA budget, then, is more about returning the federal government to a more acceptable size and empowering states and individuals to once again take care of the environment, as they have proven they can do successfully.

Reducing the EPA’s budget and regulatory reach isn’t a question of choosing between clean or unsafe air, water and lands. It’s about putting management back into the right hands. States have unique incentive to manage the environment and have networks that are much bigger and more varied than EPA’s, especially given the size of the area EPA is trying to manage compared to individual states.

Innovation and the free market promote prosperity and improve environmental quality, not command and control under the premise of “partnerships” with and “flexibility” for the states.

Congress should prevent the EPA from implementing regulations that will drive up living costs for American families for little, if any, environmental benefit. These include:

The proposed cuts outlined here merely scratch the surface of a rogue agency that has wildly spent and regulated outside its purview. It’s time for Congress to step up and rein in the agency, and a healthy round of budget-cutting is a good place to start.