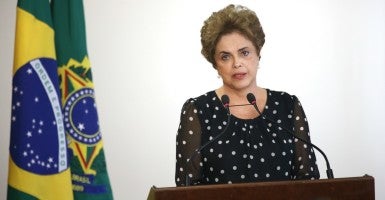 The Financial Times reports that on Sunday, April 17, “the lower house of Brazil’s congress is set to vote on the motion to impeach President Dilma Rousseff in a move that her critics hope will spell the end for the former Marxist guerrilla and the markets’ longtime nemesis.”

According to the Wall Street Journal, the Brazilian Supreme Court has denied a request from Rousseff’s attorney general to suspend the impeachment process.

If Rousseff is impeached and the Brazilian Senate accepts the case for a trial that could result in her removal from office, the Financial Times says “As early as next month, Brazil could be under the control of a new market-friendly transition government led by Vice-president Michel Temer.”

The political turmoil is taking a toll on the country. The Wall Street Journal reports that “the national mood fluctuates between a festive carnival parade and a bitter family feud” but that plans for the Rio Summer Olympics remain “on track.”

A Temer administration, though, could be good news for Brazilians. An April 13 Wall Street Journal article reported that the crisis has caused the economy to spiral “further into the depths of its worst crisis in generations.”

The bigger economic problems are structural, however. Brazil has registered steadily declining scores in recent editions of the annual Index of Economic Freedom, dragged down by too much government spending, corruption, and regulatory inefficiency.

If a new president could seize the mandate for change to gain public acceptance for politically difficult but fundamentally important reforms, Brazil could be at an economically positive inflection point.

Let’s hope the hard-working people of Brazil will not have to suffer the consequences of corruption and bad governance much longer. They can look to the example of the more positive changes now occurring in their big neighbor to the south—Argentina—for hope that the days of failed populist policies in Latin America are coming to an end.