Cultural Woes Affect Our Economy, Too 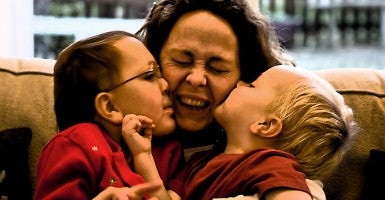 Family life and economic prosperity are connected. (Photo: “Family Shoot 5” is copyright by Stuart Richards and made available under a Attribution-NoDerivs 2.0 Generic license via Flickr. Link: https://goo.gl/zJheqB)

A thriving society needs a strong economy. The reverse is just as true: A healthy economy is built on a vibrant culture that promotes individual and social well-being.

It’s helpful to think of a society as an ecosystem—one in which cultural, political and economic spheres greatly overlap. As in any ecosystem, change in one sector reverberates across the entire system.

Take marriage, for example, a most foundational socio-economic institution. In America, this institution has been in a decades-long decline; fewer children are born to and raised throughout their entire childhood by their married mothers and fathers. Voluminous social scientific research suggests that children raised in non-intact families tend to fare less well on a host of outcomes, including educational achievement and economic mobility. Today, more than half of all American children have spent at least some portion of their childhood in non-intact households. The implications of this trend are felt throughout all sectors of society.

Last week, The Heritage Foundation released its second annual Index of Culture and Opportunity. It examines the trends prevailing in 31 cultural indicators that influence opportunity in America, including the health of marriage and the family, respect for life, educational and economic opportunity, self-sufficiency, volunteering, and labor force participation.

As Yuval Levin, a fellow at the Ethics and Public Policy Center and the editor of National Affairs, puts it: “The institutions [the Index] tracks are those that fill the space between the individual and the state: families, schools, local religious and civic institutions, and a robust free economy. The trends it follows chart the state of the core prerequisites for a flourishing society. The questions it asks are those that conservatives take to be essential to understanding the state of American life. And the answers it finds are, in all too many cases, quite distressing.”

The health of our society is distressing because, in the past decade, too many Americans have detached from the vital institutions, continuing trends that began much earlier. For example, the marriage rate is at an all-time low. More than two of every five children are born outside marriage. Fewer Americans volunteer. Religious attendance has declined.

>>> Read The Heritage Foundation’s 2015 Index of Culture and Opportunity.

Despite the negative trends, there are some bright spots. Divorce rates have declined since the 1980s, the crime rate continues on a downward course and the abortion rate has dropped precipitously. As Charmaine Yoest, president and CEO of Americans United for Life, notes, “[w]e now have fewer abortions than at any time since legalization in 1973.”

Rates of divorce, crime and abortion are still too high, but these downward trends are promising. Furthermore, more families today have access to private-school choice, which, as research shows, has promising results. Overall, however, the index shows much movement away from the institutions that promote opportunity.

Trends can change, though, if enough people recognize a problem and work to reverse course. A prime example is how the pro-life movement has successfully worked to promote restrictions on abortion and to decrease the number of children whose lives are ended by this practice.

“Addressing America’s current social and economic dysfunction will be no easy feat,” Levin said. “In order to try, society needs a clear picture of the challenges it confronts. That means first asking the right questions, an endeavor often thwarted by the politics of ‘issues’ and the radical individualism that is so endemic today. In that respect, at least, this index is not merely an insightful diagnosis but the beginning of a cure.”

Originally published in the Washington Times.