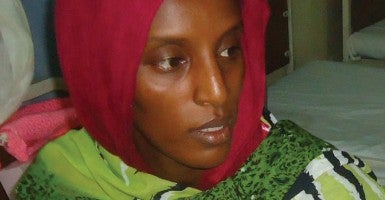 It was another long and uncertain day for Meriam Ibrahim Ishag, the 27-year-old Christian mom sentenced to death in Sudan for refusing to renounce her faith.

After being released from prison and having her death sentence lifted yesterday, she and her family were arrested by Sudanese officials earlier today at the Khartoum airport. But a few hours after that, she was released again.

In May, an Islamic  court sentenced Ishag to 100 lashes for adultery for marrying a Christian and death by hanging for apostasy for refusing to renounce her Christian faith. She was imprisoned with her 22-month-old son and newborn daughter.

The Khartoum Court of Appeals canceled Ishag’s sentence Monday and ordered the charges against her dropped.

But she, her husband and her children were arrested again as they prepared to board a plane out of Sudan. More than 40 Sudanese security agents surrounded the family and interrogated them at a national security office in Khartoum.

Fox News reports Ishag, Wani and their children had travel documents issued by the U.S. embassy. Ishag did not have a passport.

Sen. Ted Cruz, R-Texas, who has called on the Obama administration to intervene in Ishag’s case, criticized President Obama and Secretary of State John Kerry for their lack of action. “There is an urgency, a dire need for U.S. leadership,” Cruz told reporters on Capitol Hill today. “President Obama should speak out publicly and call upon the government of Sudan to free Meriam Ibrahim. Secretary of State John Kerry should speak out loudly and forcibly” as well.

Cruz wondered why the United States government would leave Ishag and her family vulnerable to the Sudanese government. “I think it’s a fair question to ask why the administration put her in a position where the Sudanese government could forcibly take her into custody again,” he said. “Their stated intentions to torture and murder her had been made clear.”

Wani, a Sudanese national, was born in Sudan and became a naturalized U.S. citizen in 2005. He resides in New Hampshire. Ishag, a physician, awaits a visa to emigrate to the United States.

Cruz joined Rep. Trent Franks, R-Ariz., and a bevy of Christian groups outside the White House earlier this month for a rally in support of Ishag. Just one day later, Kerry issued a statement condemning the Sudanese government.

“I urge the Sudanese judiciary and government to respect Ms. Ishag’s fundamental right to freedom of religion,” he said.

Republican and Democratic lawmakers joined forces in calling attention to Ishag’s case. In addition to a number of legislative actions proposed in support of Ishag, Sen. Rand Paul, R-Ky., spoke in defense of women and Christians around the world during a Senate Foreign Relations Human Rights Subcommittee hearing.