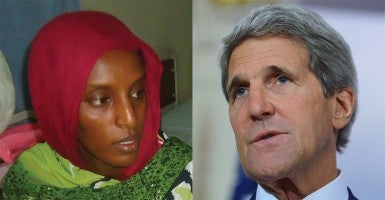 Secretary of State John Kerry expresses "concern" for the plight of Meriam Yahia Ibrahim Ishag (left), mother of two and wife of a U.S. citizen, who is sentenced to death in Sudan for her Christian faith. (AFP Photo/Getty Images/Newscom)

A day after Christian groups rallied outside the White House seeking presidential action on behalf of a mother condemned to hang in Sudan because of her Christian faith, Secretary of State John Kerry posted a statement of “concern” about her persecution.

Kerry appealed to the Sudanese government in the case of Meriam Yahia Ibrahim Ishag, the 27-year-old mother sentenced to death for refusing to renounce Christianity, and asked the African nation to tolerate freedom of religion.

“I urge the Sudanese judiciary and government to respect Ms. Ishag’s fundamental right to freedom of religion,” Kerry said in the statement posted Friday on the State Department website.

Ishag, a native of Sudan and wife of a U.S. citizen, remains imprisoned in Sudan. An Islamic court sentenced her to 100 lashes and death by hanging two years after giving birth for “adultery” – marrying a Christian man – and “apostasy” for refusing to denounce her Christian faith. Her 20-month-old son, Martin, and newborn daughter, Maya, also are being held.

Several prominent Christian groups gathered last Thursday in front of the White House to rally for Ishag and call on President Obama to act on her behalf.

Ishag’s husband, Daniel Wani, also was born in Sudan and became a naturalized U.S. citizen in 2005. He resides in New Hampshire; his wife awaits a visa to emigrate to the United States.

Sen. Ted Cruz, R-Texas, and Rep. Trent Franks, R-Ariz., joined the organizations in asking Obama to persuade the Sudanese government to allow the imprisoned woman and her children to leave for America.

“Meriam Ibrahim deserves more than a statement posted online from this administration,” Catherine Frazier, a spokeswoman for Cruz, told The Daily Signal today in an email, adding:

We hope that President Obama and Secretary Kerry will stand up and lead the effort to speak out against Sudan’s persecution of Christians and take concise action to bring Meriam and her U.S. citizen-children home.

President Obama has appeared to remain silent as news of Ishag’s plight spread worldwide. Members of Congress joined forces to condemn the Sudanese government and call on the State Department and White House to come to her rescue.

A bipartisan group of lawmakers signed on to a resolutions sponsored by Franks and Sen. Marco Rubio, R-Fla to increase  international attention to Ishag’s case. Rep. Tom Cotton, R-Ark., and Sen. Jeanne Shaheen, D-N.H., introduced legislation to grant the woman, a physician, and her children permanent U.S. residency.

More than 25 lawmakers penned a letter to Kerry asking him to confront the Sudanese government. In his formal statement, Kerry said:

Sudan’s journey has long been a struggle, and back when I was still a United States senator, I traveled to the region many times to help find greater understanding and hope for a different kind of future. As secretary, I remain deeply committed to the country and its people. That is one of the reasons we are all so concerned about the travails of Meriam Yahya Ibrahim Ishag.

In his statement, the former U.S. senator from Massachusetts and Democratic presidential nominee does not demand that Sudan release Ishag and her children nor does he address the prospect of granting Ishag temporary asylum in the United States.

Kerry does say the State Department “remains deeply concerned about [her] conviction and continued imprisonment.”

Although the children are U.S. citizens because of their father, State Department spokeswoman Marie Harf wouldn’t comment on their status when pressed in a June 5 briefing. Harf said State has been in contact with Ishag’s lawyers and the Sudanese government.

More than 52,200 people signed a petition on the White House’s “We the People” page asking the president to pressure Sudan to release Ishag and her children. It needs to reach 100,000 signatures by the end of June to trigger an official White House response.